Lee: Just when I think that things are getting light, a month like this comes along. There is sooo much good stuff to chose from it's unbelievable.
Jim: See I hate that. I'm so addicited to getting good stuff, I'm never caught up with my reading. 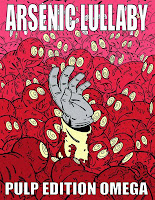 Arsenic Lullaby Pulp ed. Omega by (W/A) Douglas Paszkiewicz
Fresh off its Eisner Award nomination, Arsenic Lullaby returns to prove it has not lost its edge and that it remains the king of dark humor. Two fat loser vampires sink to the level of attacking the handicapped rather than struggle to get blood out of heathly adults capable of defending themselves, a voodoo witch doctor is being attacked by zombie fetuses, and an alcoholic cereal mascot accidentally combats Cuban communism. $9.00 CBR recently did a great interview with preview pages here. The original site with all sorts of sneak peaks, etc here

Lee: Black humor at its blackest. This book skates the very thin line between gross and tasteless and really funny. If you like your humor cutting edge then this is for you.
Jim: Joyously (or sadly) this type of humor sounds to be right up my alley. I grew up with Gahan Wilson, so dark humor is something I enjoy. 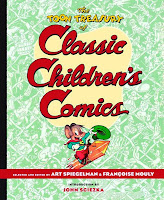 Abrams Comicarts
Toon Treasury of Classic Children's Comics HC
This treasury created for young readers focuses on comic books, not strips, and contains humorous stories that range from a single-page to eight or even twenty-two pages, each complete and self-contained. The comics have been culled from the Golden Age of comic books, roughly the 1940s through the early 1960s, and feature the best examples of works by such renowned artists and writers as Carl Barks, John Stanley, Sheldon Mayer, Walt Kelly, Basil Wolverton, and George Carlson, among many others. $40.00

Lee: THIS IS EXCELLENT! From the hey day of comics (the Golden Age) comes a collection of humor stories! Storywise, superhero stories from the 50’s don’t read very well compared to today’s books. But stories like pre-code horror and humor always hold up well. Some stories are better told than others, but they are almost always entertaining. This will be a collection of outstanding art and laugh out loud stories. I am really looking forward to this.
Jim: This does sound like an excellent collection. I just hope in their picks they left all the material unedited. I also hope the reproduction is done with care.

Archaia Studios Press
Killer Vol. 02 HC by (W) Matz (A) Luc Jacamon
While trying to avoid the kinds of personal entanglements that make the life of a professional assassin all the more difficult, our Killer exacts what he hopes will be his revenge on those that have sent his life and career into its long and downward spiral back into humanity. Collects issues #5-10. $21.95

Lee: This was an excellent, excellent series. Sadly, Archaia’s financial troubles put the whole story in jeopardy. Even though there’s a good chance that I won’t get an ending I’m still going along for the ride. It’s that good.
Jim: Issue #10 shoud be the end of the story. So far singe issues #1 - #8 have been released and the first collection has been released. This is an excellent story and great artwork. If you like the premise, you will enjoy this comic. 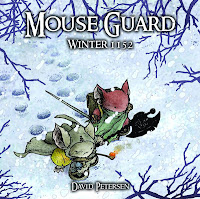 Mouse Guard Vol. 02: Winter 1152 HC by (W/A) David Petersen
In the Winter of 1152, the Guard face a food and supply shortage threatening the lives of many through a cold and icy season. Saxon, Kenzie, Lieam, and Sadie, led by Celanawe, traverse the snow-blanketed territories acting as diplomats to improve relations between the mouse cities and the Guard. This is a winter that not every Guard may survive! Collects the second Eisner-Award winnning series with an all-new epilogue and bonus content. $24.95

Lee: The first Mouse Guard was good and I really enjoyed it. It’s way more than the kiddie book that mice are normally in and I’m looking forward to this too.
Jim: This is one of the best all ages and modern fairy tales being produced today. Too often children’s books are so water down and happy/happy, joy/joy type gobbledygook that I think even five years olds must be bored after ten pages. The stories I grew up on and my kids were read had an edge to them that made them exciting and memorable, but still age appropriate. That’s what this is, just being produced today.
Lee: Wha the? Who? Did we read the same book? I read this to my kids. It was well past edgy. It’s young adult fare disguised as a kiddie book.
Jim: See Lee thinks that way because he grew up reading sanitized crap to his kids. Look back at even the early Disney movies and you will see that children's stories had some danger and excitement in them. It was not always rainbows and puffy white clouds in a world where the worst thing that happens is a skinned knee or a hurt feeling.

Archie Comics
Archie #600 by (W) Michael Uslan (A) Stan Goldberg
Archie Marries Veronica Part 1: The Proposal. It's the milestone 600th issue and we're serving up the Archie story of the century as Archie marries Veronica! Could it be true? Has Archie finally decided to take the plunge and propose to comics' favorite rich girl? Make way for this special story that takes a look at Archie and his friends after they graduate college. Will the friends stay in Riverdale or disperse? What would lead Archie to have marriage on his mind? And why would he choose Veronica over Betty? How will Betty react? Two things are certain: with the Lodges as hosts, this will be the biggest wedding Riverdale has ever seen - and the biggest Archie Comics story since the famous Love Showdown! $2.50

Jim: I love this type of book. All the non-comic book people will be all over this thinking it is an Earth shattering game changer, when in fact it is a six issue stunt of Archie going to the future and seeing him get married to Veronica. Who wants to bet that at the end of the sixth issue Archie is back in high school after the trip to the future and wonders what would happen if he married Betty. That does not mean this will not be a fun read, but it is akin to the old DC “Imaginary Tales” material – which were usually great stories.
Lee: I find it very amusing that you picked this. I purposely avoided picking because of the impending hype and brouhaha about the issue. I’m with you, I don’t think there will be any lasting change.

Jim: This always disturbs me on some level. Why not buy the Sports Illustrated Swimsuit Edition or look up bikini models online instead of looking at pencil and ink drawings of “hot” girls. Lee: I don’t see what disturbs you about this? What do you think they did in the middle ages for entertainment? They drew pictures of women in bear skins (because the bikini was invented yet). This is nothing new. In fact, remember the 90’s when every publisher came out with a swimsuit issue? Heck, even Amazing Heroes (The Wizard Magazine of the 80’s) did a swimsuit issue. You’re being prudy.
Jim: Not prudy, concerned about the people who find this more titillating then the real thing.

Avatar Press Inc
Absolution #1 by (W) Christos Gage (A) Roberto Viacava Cover: Jacen Burrows
You’ve seen Christos Gage's work for Marvel, WildStorm, IDW and others, but you’ve never seen his imagination unleashed with absolutely no restrictions...until now. ABSOLUTION introduces John Dusk, a superhero in a world where they're a sanctioned arm of law enforcement. But this veteran hero has been scarred by his exposure to man's infinite capacity for evil, and he's seen one too many perpetrators escape justice. One day he crosses the line...lets a murderer die...and discovers it feels good. Surrounded by sociopaths, both human and superhuman, who he knows will prey on others if they're not stopped--permanently--how far will he go, knowing every step he takes puts him further on a collision course with his teammates Alpha and The Servant, not to mention his homicide detective girlfriend? $3.99, #1 of 6

Jim: I want to see this, but the damn Zero issue was hyped months ago and we saw Nada. I hate what I got all hot and bothered for something and then she has a headache --- I mean then the comic never shows up.
Lee: I can’t believe you’re letting one late book get to you. Everything is late these days. Nothing has a set schedule! I’m still excited to see it.
UPDATE - Issue #0 finally hit the stands and it was a good opening.

Lee: As always, I love proven commodities and this appears to be one. Even if Jim doesn’t agree, winning the Xeric award is no small feat, and the winning writers/artists/books typically are a cut above the rest of the comic world. The previews are pretty sparse but I liked what I saw. I’m looking forward to this book.
Jim: Sometimes award books are good and sometimes they are bad. I'd rather take a personal recommendation or from a reviewer I follow. With many good reviewers you know whether you will like something even if you opinion differes from the reviewer.

Boom! Studios
Die Hard: Year One #1 by (W) Howard Chaykin (A) Stephen Thompson America's greatest action hero is translated into the sequential art form for the first time! Every great action hero got started somewhere. Batman Began. Bond had his Casino Royale. And for John McClane, more than a decade before the first Die Hard movie, he's just another rookie cop, an East Coast guy working on earning his badge in New York City during 1976's Bicentennial celebration... and the Summer of Sam. Too bad for John McClane, nothing's ever that easy. Join legendary industry creator Howard Chaykin on a thrill ride that's rung up over 1 billion in box office worldwide and become the gold standard for classic action! Yippee Ki Yay! Covers by Dave Johnson, Jock, and John Paul Leon. $3.99 Visit Stephan’s blog here.

Jim: I love most of BOOM studios offerings, but this one I think is a concept whose success as a comic is a huge question mark. I mean I enjoyed Die Hard IV, but this book is not stirring any interest in me.
Lee: These days everything’s success is a question mark. Who would have thought that the Muppets would be a sell out? Anyway, this fits nicely into the crime fiction genre. And, with an established name like John McClane as a lead character it should help draw readers. Chaykin’s latest superhero stuff has been weak but he’s always does crime well. I bet this is a winner. Plus Thompson’s art looks cool.

Lee: “The Movie Event of the Fall”? I haven’t even heard of this movie and it’s already an event? Anyway, Diablo Cody, the screen writer, isn’t even involved but we still get this story. I think it’s interesting. It has potential to be good but $25 for a hc tying into a movie I probably won’t see. That’s asking too much.
Jim: I agree. Feels too pricey.