It's 1982. Wolfman and Perez. New Teen Titans. Oh, how things have changed. Not just now from then. The Titans was a big change from the original Teen Titans. Originally a low effort spin off for side kicks of Batman, Wonder Woman, Green Lantern, The Flash, and Aquaman, the new 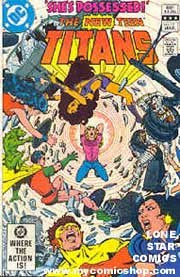 incarnation gave a lot more life to its characters. The cast still included Robin (Dick Grayson, even), Kid Flash (Wally West), and Wonder Girl (Donna Troy), but Speedy (Roy Harper) and Aqualad (Garth) had taken a pass. Instead Changeling (formerly Beast Boy of Doom Patrol), Cyborg, Starfire and Raven were added. As new creations beholden to no side kick mythos, the latter three were open to any interpretation their creators wished and provided a sort of tabula rasa for the series, as well as a freshening of Robin, Kid Flash and Wonder Girl.

I didn't get on board with the series until issue 17. Being in rural PA at that point in my life, and only 14 (and there not being any internet yet), it took awhile before I heard about the series. At some point I'll have to get crackin' and pick up trades of those first 16 issues, though I read some of the stories in later re-prints. 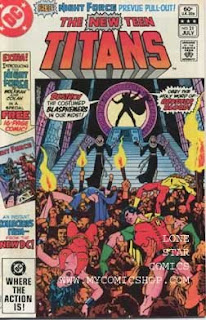 While the stories gave a lot more adult spin to the characters, including sexual relations between some of them, the series also harkened back to the older form of story telling. The first 4 issues I bought were all single issue tales. There were longer running story lines going through them, but each story told a unique tale that could be read on its own. There was the story of a girl named Francis Kane who had magnetic powers and was disowned by her mother, who thought she was possessed (though it was actually Dr Polaris trying to escape from some other dimension). There was the story of the Russian Starfire and a bitter Soviet scientist's attempt to poison the US. There was a story about Dr Light trying to rob a museum and accidentally bringing to life aspects of Vishnu, which then tried to kill him.

Even the longer running stories didn't take up nearly the page space of today's story arcs. A two part Brother Blood story was followed by a 4 part (including the first annual) Starfire versus Blackfire (her sister) story, and a 2 part runaways story. Terra was introduced about this time 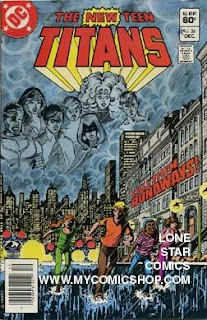 , and I see she's coming back from the dead in Blackest Night, just going to show that some characters never go away (and reinforcing Bill Willingham's idea in Fables that the beloved characters can't be killed off as long as they're held in the public mind).

Some great villians were involved in these stories, too. The aforementioned Brother Blood and Blackfire, but also a very different Dr Light, who is really all coward and not at all psycho rapist. One of my favorites, though is the Brotherhood of Evil, whose name harkens to the Brotherhood of Evil Mutants in the X-Men, but is composed of a French guy who's nothing but a brain in a tank, a French accented gorilla, a French guy who can travel through warps, a German guy who's a toxic protoplasm, a Haitian who's a high tech hogun and a woman of unknown ethnicity who preys on fears. Just reading the description, you're looking at a great comedy team, but played straight they're an effective and deadly opposition to the Titans.

What really made the book, though, was the characterizations of the Titans. Though teens, they were, aside from Changeling, adult teens. There was much agonizing over the difficulties of school and super heroing, the perils of a demonic father, the travails of artificial limbs and a scary exterior, and the trials of memory loss. But there was some happy, too. Donna Troy was dating a college professor and engaged to be married. Robin and Starfire became a couple, even though Robin's own issues were a hinderance. Changeling was a constant source of amusing buffoonery, using it as a shield for his feelings of inadequacy. 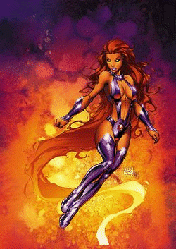 This was but a small sampling of the series run that I still have. In addition to the difference in 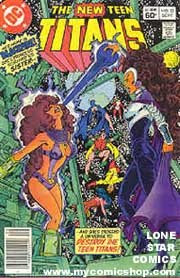 Dr Light's characterization, one of the things I most notice in my re-reading is the change in Starfire's appearance. When I was a kid I thought she was the hottest thing in comics, what with that skimpy costume and her fondness for total nudity, but I notice now how differently she's drawn. Her breasts were oviously notable back then, but now it's more like balloon smuggling. Wonder Girl, too, for that matter. The depiction then was sexy without the fan boy excess. More notable still is that when Terra, who's supposed to be 15, is introduced, she has a young woman's body and not a fully developed one. Don't see too much of that in drawings of young women in superhero comics now.

Not that I'm against sexy women in comics. I think it's just time that some of the artists came to the realization that a more realistic depiction of women is actually sexier than the excess. Or maybe it's just my skewed perspective from having read a 40 point critique of Rob Liefeld on June 17. Either way, I like the more human presentation of women.
Posted by Thomm at Sunday, June 21, 2009