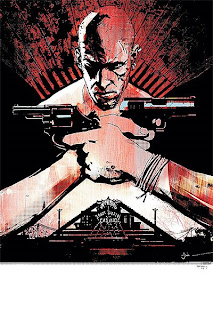 
Now I hate Wikipedia for the most part, but for certain types of information wiki can be an okay source. So I looked up noir and you get that noir is usually “hardboiled” crime fiction. Okay Scalped is certainly that, then I looked up “Film Noir” as that is where many authors of the genre like to quote as inspiration. Wiki says “Film noir is a cinematic term used primarily to describe stylish Hollywood crime dramas, particularly those that emphasize moral ambiguity and sexual motivation. Hollywood's classic film noir period is generally regarded as stretching from the early 1940s to the late 1950s. Film noir of this era is associated with a low-key black-and-white visual style that has roots in German Expressionist cinematography, while many of the prototypical stories and much of the attitude of classic noir derive from the hardboiled school of crime fiction that emerged in the United States during the Depression.” So it is almost circular as the books inspired the movies that have inspired today’s writers. Oddly we are seeing a rise in the noir genre as our country is sinking into another Depression, coincidence of not it is interesting to note.

As each form follows the next elements are taken from the inspiration, but each writer brings in new elements. No longer is it set in a certain time period, no longer is it always black and white, no longer is it prose only and no longer is it film only. Right now I think comics own this genre better then anyone else. Since I have not checked on the novelists in this genre I could be wrong, but movies have ignored it for the most part. There are a fair number of comics doing this work with 100 Bullets being the premier series, but since that has ended; Scalped has to be the number one “noir” comic on the stands and often the best comic period on the stands. This issue proves the point.

This issue is the conclusion of the “High Lonesome” story arc, which was really a two part story, with some great background material put into the middle three chapters. Also after months and months of Dash Bad Horse being a minor player in the book where he appeared to be the central character, he gets a ton of “screen time” in this issue. We open with Dash coming back to his girl friend Carol’s house blood all over him, cuffs on one hand and obviously freaked out to the nth degree, we then go backwards and learned what has happened to Dash.

A plot summary would not do this book any justice, you need to go out and read the issue itself. One line I have to remark on is the splash page with the title box. It is a picture of Dash high on heroin and drinking whiskey and obviously about to fall over. Above the title it says “Rock Bottom Population 1”. Truer words have not been spoken. Dash is obviously the resident of a town that many of us believe we have visited, but I think he is really there. I think you could read this issue on its own and get enough out of it to be convinced how strong of a read this book is and how strong of an the regular artist RM Guera is. We see Dash deep into his heroin abdication and see how stupid luck saves his life. We see Dash starting to realize that he has to pull his sh*t together and we see the brutality and violence Dash is capable of inflicting. Finally we see Dash go back to Carol and apparently about to confess to her about him being an undercover FBI agent. This next arc should be flat out unforgettable as all the pieces have been laid out for 2 ½ years and while it has been a great book, I feel like the crescendo we have been building to is coming up now.

The artwork on this book is excellent. RM Guera has gotten better and better as time goes by. Each character has a distinct look and you can often tell who they are even from the back. The looks of desperation and fear are etched in the character’s faces. His range is from cold indifference to outright rage and all the ones in-between. A strong sense of realism, great layouts and design all finished off by a colorist who keeps it dark, but allows us to see the great art. This book has it all.

Overall Grade A – An absolute must read.
Scalped is Jason Aaron and RM Guera’s seminal work. It belongs in the category of Sandman and Starman (by James Robinson) as a book that delivers as a long term a fantastic story and creates characters we believe are real.