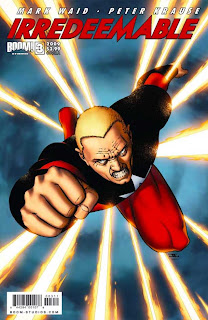 It had to happen; I just wish it had not happen so quickly. When you first go out with someone the first few dates are always full of surprises and the first underpinnings of love is the initial lust you feel for each other. Lust is such a heady phase of the courtship that often people continue to seek the lust and the more rewarding and long term love is never found. So while I know the lust phase of the relationship had to end, I was hoping it would last a little longer.

Is this a comic review or a chapter from Romance magazine? (Yes I ask and answer my own questions.)

Irredeemable #3 was another excellent issue and continues to slowly shine a light on what the heck is going on with the Plutonian, but my socks stayed on this time.

We open with the Plutonian floating above what appears to be a Green Arrow / Black Canary super hero couple in the missionary position. The Green Arrow character had been dressed as the Plutonian and the Black Canary character is asking to be saved. Since a dark hair wig falls off I’m guessing this is some reenactment of what he hoped had happened with his girl friend Alana as a tear is rolling down his cheek. He does not kill them or anything and ultimately that is the problem I had with these pages, what was going on exactly. Sometimes I miss what a writer is doing and I’m not sure if it is because I follow too many stories or if the writer missed the mark, but these pages did not enlighten me enough.

The next part of the book is about Paradigm’s continual spying on the Plutonian. This issue a group of the Plutonian's old villains have taken over the Inferno’s hidden headquarters (think Batman). As they are discussing what to do and if the Plutonian can now be considered a friend of theirs, the Plutonian shows up. After some subtle turns, the Plutonian sets up his new friends to kill themselves and takes two members of the Paradigm with the bad guys. One girl survives and is begging for her life and he asks her what she would look like with a wig on. So okay I get the whole trying to recreate his girl friend stuff, but not sure why he was watching the sex between Ollie and Diana in the beginning.

All in all a good issue, but perhaps a more subtle issue then the first two. Instead of finding out more about what turned him into such a total bastard, we find out that he still is yearning for some form of acceptance and companionship. Mark is still laying the foundation of this book and I’m more then willing to give him a “quite” issue of the series, I was just still looking for the lust and I find that already it is becoming love.

Also realise the summation I'm giving about the book is leaving out large chunks of other things happening with Paradigm. One of the things I love about this series is we get a lot of plot, characterization and back story in each and every issue, a true bang for the buck.

The artwork on this book is outstanding. Peter Krause continues to outdo himself. Each page is laid out well, the book reads like a dream, but at the same time I have a tendency to read this comic twice. The first time I’m reading through the story is to see what the next piece of the puzzle that drives the Plutonian to the dark side is and the second time to linger looking at Krause’s artwork. His work is so clean, so dynamic and so realistic (without being the annoying photo realistic work of some artists) that you have to step back to really get the full effect. Reading as a PDF I will cut the size down and just look at the structure of the book and the more I examine the art, design and readability of this book the better it becomes. The color work continues to dazzle and enhances the mood and the art and never overwhelms the book.

Overall – Another A – My growing affection for this book has not waned, but we are moving to a new phase.

All kidding and romantic metaphors aside, this book is reading like a template in how to write, design and illustrate a comic book series. I love BOOM and would hate to see Mark Waid leave, but if I was DC I would hire him as EIC and give him a five year contract at least. Than I'd let him work his magic across the entire line. Mark not only talks a good game, he not only still has it, he is still looking to get better and he is. Mark’s best work is often his latest work.
Posted by Jim at Tuesday, June 02, 2009