Batman Streets of Gotham #1 – A Review 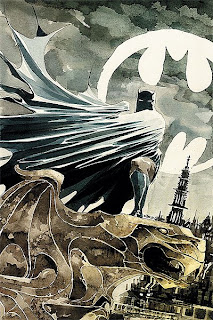 This book was a great surprise. I was expecting more of a Gotham Central type of book and got what is more of a mixture between a Batman series and a series about the cops of Gotham. Not what I was expecting but a great start to a new series. Paul Dini is picking up from his Detective comic work and has seamless inserted the new Batman and Robin into the mix of everything he has going on in this book.

It starts with a disturbance in a jewelry store where we find Harley is mixing it up with the owner because he thought she was robbing the place. Harley has money due to her helping out Catwoman before and Jim Gordon let’s her walk after she buys what she wants. Cut to Batman telling Harley to start over in another city.

Then we cut to a scene with a big thug of a guy sort of stopping an underage prostitution thing from happening, and then we cut to the Firefly who is injecting people he passes by. As all of this is going on we manage to get a scene in with Tommy Elliot and Damian playing chess together and verbally sparing. Next we learn what the Firefly is up to as people start to burn. Batman and the GCPD try to keep the panic to a minimum. Then Robin calls Batman to the roof as we see a Batman signal is laid out in flames around a city block. Gordon spells it out that the second tier of crazies have gotten more dangerous.

It all interweaves so well. It brings in much of what Paul had done with Detective and Tommy Elliot before, it is incorporating elements of what happened with Battle for the Cowl and it is picking up threads left from what has been happening with the Gotham City Police Department. It was an excellent read and a wonderful addition to what has to be counted as DC’s most successful re-launching of a character in many, many years. Congratulations Mr. Didio, the new Batverse looks great with only one more book to go.

The art by Dustin Nguyen was well done as always. He has great story telling ability and his light line work worked very well in this story. Also with Damian now being Robin his pint size take on the character is fine, when he drew Tim the same size it was disconcerting.

Than joy of joys we got the second feature in the book and it was Manhunter. Now Marc Andreyko got a little preachy with Kate last time out, but boy she fits perfectly into Gotham and preachyness gave way to a good story. We got to see how Kate has become the emergency DA for the city and see her start out her first case. George Jeanty’s pencils were a godsend for Manhunter. He is the perfect artist to make it both a super hero book and maintain a noir quality to the story. Also Marc did a great job in giving us the back story, setting up the character and getting the story started in just 10 pages.

Overall Grade A – The Streets of Gotham is the place to be for drama and action.
Posted by Jim at Wednesday, June 17, 2009