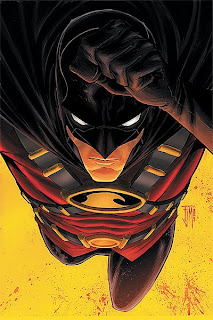 Red Robin #1
Publisher DC Comics
Writer Chris Yost
Art Ramon Bachs
Colors Guy Majors
The Bat books have me interested in the Batman Universe again in a big way. I have always been a Batman fan, but this reinvention has me jazzed and I’m looking forward to each book as it comes out.

Red Robin was good and bad. As I have learned over the years you should talk about the good first. Plain and simple the good is that the premise for the book is a solid idea. Tim (Drake) Wayne believes Bruce Wayne is alive in and out in the world somewhere and needs help. Tim will be the one to find and save him. Since the Robin costume has been taken, he picks up the often used Red Robin costume and takes off the find Bruce.

I love this idea. Tim has suffered the loss of his parents, the apparent death of his one time girl-friend Stephanie, the death of his best friend Connor Kent and a good friend Bart Allen. Recently he was adopted by Bruce and even took his name and now it appears he has lost Bruce and been replaced as Robin. Tim has always been a different Robin and probably the best adjusted of any of the team. Still since he has become Robin he has had the harshest life and “is he still the best adjusted” could be questioned given his attempt to recreate Superboy and considering resurrecting his parents.

So the premise is very strong and after this first issue is completed the premise is intact. Plus we end with a picture of Ras As Ghul and we know the road to finding Bruce will be an interesting one.

The bad is the actual execution and the way the first issue was told. It was very jumpy and went from past to future and place to place with almost no rhyme or reason. Tim stops a kidnapping in Spain, we cut to Czechoslovakia for some reason and then Tim is in Paris and stopping a crime. In between we jump to the past and see Tim get pissed about Dick wanting to have Damian as Robin. Tim gets pissed and breaks some stuff and says Bruce is alive and then goes on his quest.

There is no rhyme or reason to why he comes to this conclusion. No emotional moment where he decides Bruce has to be alive since he has lost everyone else. There is no reason for why Tim decides the main premise of the book. Then there is no reason for why Tim goes to the places he is going too. No sightings of a person like Bruce, no accessing of the Wayne fortune, no mysterious avenger of the night in these places; it appears that Tim is just trolling around Europe. The premise was strong, the idea is good, but the building of a rationale was non-existent. If they correct next issue, bravo, if not the complaint stands.

The art work was good. Ramon Bachs did a good job throughout the book. The page design and layouts keep the story flowing and the action scenes were solid. I’m not blown away by Mr. Bachs yet, but I’m happy to have him on this title and watch to see if he can up his game.

Overall Grade C – A suspension of disbelief does not mean logic goes out the window.
Posted by Jim at Friday, June 12, 2009