Not the Devil You Know

Laverne and Shirley? Mork and Mindy? Maude? After MASH? Yes, it's the rage of the '70s and early '80s, the spin-off. Says so right at the top. "From the Pages of The Sandman". Lucifer was a lot better than any of those TV spin-offs, except maybe Mork and Mindy in its pre-Jonathan Winters days. Now that was some inspired insanity. Exidor, anyone?
Vertigo's Lucifer hit the ground running in June 2000, which seems longer ago than it was, but I 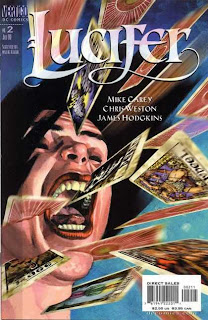 suppose that's just me. All of the 75 issue run was written by Mike Carey. The character was developed, of course, by Neil Gaiman in The Sandman, but Carey took it and ran with it. And he got to the point quickly in his story arcs. In the first 9 issues there were arcs of 3 and 4 issues as well as two single issue stories. Each one of these story lines introduced characters who would play major parts in the 75 issue run, but told complete stories for those characters that gave a satisfying conclusion even in those small bites.
The story opens where The Sandman story ended. Lucifer abdicated his position as ruler of Hell, had Morpheus remove his bat-like wings, and opened a night club called Lux in LA. Hell is now co-ruled by the angels, Remiel and Duma, the latter of whom does not speak. They have parted with Lucifer's wings that he left behind, and the wings are now in the possession of the Izanami, Mistress of the Windowless Realms, a goddess of the Japanese Hell. Now Lucifer, accompanied by the faithful Mazikeen, with her nearly incomprehensible speech, even in written form, is looking to regain possession of his wings.
The first three issues introduce Jill Presto and the Basanos, a deck of tarot cards created by an angel that are seeking freedom from their creator, who's living as a book curator and collector of all the known written works of humanity. The Basanos ends up taking possession of Jill Presto while Lucifer obtains a letter of passage from Heaven, which he uses to open a gate in reality. Lucifer leaves it open, knowing that if he goes through it, it will close and cannot be re-opened. He guards it with a name of God in Hebrew that prevents God from closing it without destroying all of creation. He also leaves Mazikeen as guard from lesser beings seeking to use the gate.
That's a broad overview. Carey puts in lots of great details, like Presto's life to that point, or hints of it. There's a related story of a gay Turkish friend of Presto who is nearly killed by Nazi thugs, including one who is a friend of the gay man (the story takes place mostly in Berlin for these 3 issues). Each card in the Basanos has a separate personality/character/role, but is part of a whole working together. 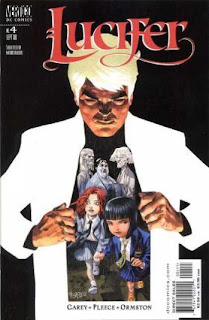 The 4th issue is a stand alone story introducing Elaine Belloc, who can talk to the dead, among other things. Her friend Mona has been killed and Elaine's determined to find out who and why. In the course of things she tries to summon a minor demon, but when that doesn't work she tries to summon Lucifer. He hears but doesn't come then. He does come to meet her later, as his curiosity is piqued. He alludes to her being the result of centuries of planning, but the story is mostly about Elaine and Mona finding out who killed Mona. Elaine ends up killing Mona's killer in a rather clever fashion, after he's taken her prisoner. Elaine will be a major character in the series run, too, but this story is great all by itself. Oh, and Elaine is about 11 or 12.
Issues 5-8 are about Lucifer confronting, obliquely, Izanami. She appears to be made of stone and sits motionless and speechless, much larger than life, while her 3 sons run her Hell. There's much dancing and turning, but in due course Lucifer tricks one of the sons into killing another and then watches as the killer son dies from poison Lucifer had 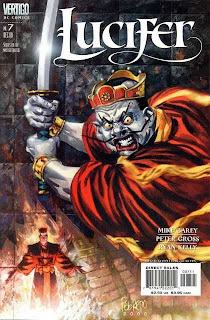 slipped into the killer's wine. In the end, Lucifer gets his wings back. Meanwhile, in LA Mazikeen is defending the gate from some very, very old demons/gods who want to use it themselves to escape the drudgery of their existence. A fire occurs and Lux burns. There is also a small crowd of people around the building who have felt a call of some kind from the gate and are experiencing a mystic, messianic sort of thing.
Once again, it's a great establishing arc, but it's not the reason the story is so great. It's the character creations. Mazikeen's loyalty. Jill Presto's misguided healing of Mazikeen. The crowd of deluded people. The demons/gods who don't even know what it really is that they're after.
Finally, in the 9th issue Carey introduces a source power. Lucifer has abdicated his role, but isn't without power. Still, he'll need more to accomplish his goal, which is freedom. Remiel alluded to it in the first pages of the first issue while speaking with Susano, one of Izanami's sons, when he said Hell was designed by Lucifer as a vast open space because Lucifer was obsessed with freedom. 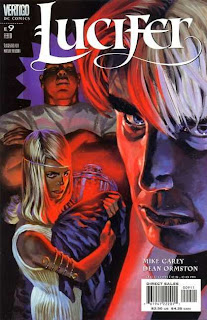 In the 9th issue the story revolves around Erishad of Eruk, once the high priestess of Chaldean gods, some 4000 years ago. For some transgression they want her to kill herself. She objects because she's pregnant and asks to be allowed to wait until the child is born. Offended, they curse her to be reborn everyday, no matter what's happened to her the day before. It also means she has the same miscarriage every morning. When the story begins she wants to use Lucifer's gate to escape to non-existence, but he refuses and tells her it wouldn't work anyway. She then seeks out a voudun practioner for help in exacting revenge on the Chaldean gods. With him they summon the gods, who are now too weak to remove their own curse. They then summon the repeatedly miscarried fetus, which has grown enormously in power and bears little resemblance to a human. Though bottled by her companion's magic, she uses its power to kill the Chaldean gods. Her companion is killed in the course of it, and she's still stuck with the curse, but now Lucifer re-enters the picture and agrees to end her existence in exchange for the bottled fetus. She agrees. She dies. Lucifer has a tremendous source of power.
All this is just 9 issues, with 66 more to go. It's great story telling with attention to detail, plot and movement. Through much of the series Peter Gross is the artist, and he is for issues 5-8, but we also had Chris Weston and James Hodgkins on the first three, Warren Pleece and Dean Ormston on the 4th, and just Dean Ormston on the 9th. Those artists had varying styles, but all worked well with Carey's writing.
Of course, I don't believe in Lucifer any more than I believe in any other diety, but he sure is a great character. Like any great mythology story, he has complexity. He's not evil, but he's not good, either. Like humans, he's shades of grey. He has a goal, freedom, and will do what he needs to in getting there, but he knows the rules of gods and demons and operates within those rules. That's especially well shown in his interactioins with the Japanese dieties when he turns their own rules and restrictions that they've designed to put them in a superior position to any visitor against them. He also uses what he knows of other beings of power, such as Morpheus, to keep his opponents in line. He's not the characterized devil of children's scary stories. He's more akin to the devil of Job, but even then he's considerably more complex than that.
After all, the biblical devil never seems to ask the obvious question of why he's being punished for rebelling if God designed him to rebel and knew he would rebel. To this Lucifer, that's the crux of it. The freedom he seeks is from God, not from his job as ruler of Hell. He seeks to be entirely outside of God's creation to be free of God. The whys and possible hows of that are set up in these first nine issues, to excellent effect. There's a lot of ground covered between this start and Lucifer's eventual attempt at Freedom, as well as the results of his attempt.
I'll be revisiting this again for more arcs down the road. If you don't want to wait for whenever that might be, get thee to a bookseller and buy some trades. It's worth the investment.
Posted by Thomm at Sunday, June 07, 2009