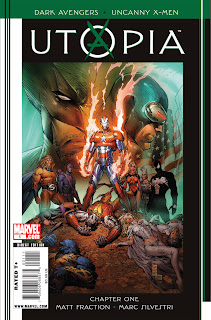 Dark Avengers / Uncanny X-Men Utopia – Chapter One
Publisher Marvel Comics
Writer Matt Fraction
Pencils Marc Silvertri
Pencil Assists – Michael Boussard, Eric Basaldua, Tyler Kirkman & Sheldon Mitchell
Inkers Joe Weems with Marco Alli, Weric Basaldua, Rick Basaldua, Jason Gorder, Jay Leisten, Sal Regla, Jon Sibal, Ryan Winn and Rex the Wonder Dog
(I only added Rex)
Colors Frank D’Armata
I had just recently cancelled getting Uncanny X-Men and that left me buying X-Factor, Wolverine Weapon X and I’m sure some other X-book (at least a mini-series). I had dropped it because Matt Fraction is so annoying with his captions and the fact the stories were not captivating. Still Dark Reign is almost too big to ignore and curiosity got the better of me, so I got this opening chapter that is dragging the X-Men kicking and screaming into the mainstream Marvel Universe. I will probably follow it out of some masochistic tendency that must be buried inside of me, but this book was crap.

Now just calling a book crap is not much of a review so let’s examine this tripe in some detail. It starts with Simon Trask and he has started a march in California from Sacramento to San Francisco to try and get laws passed about how mutants should be allowed to breed. A quick look up of the distance tells you this is about 90 miles, one hell of a walk. He has an impossibly large group marching with him and all are portrayed as basically white bread America. They have taken to the streets and marched to San Francisco to demand these laws be passed to control mutant breeding. Oh for crying out loud, what incredible garbage, even for a comic. Number one, good luck on getting our lazy asses up and out to march from the mall in Washington to the White House after being driven in an air conditioned bus, much less march 90 miles. We let our government pass a stimulus bill that by most reports had a 90% disapproval rate among Americans and we did nothing. But we are supposed to believe that this would happen to try and control how people breed. Plus using mutants as an analogy for racism was interesting and good story telling back 40 plus years ago, but we have made progress and changes in the real world and some of that should be reflected in the Marvel Universe as they pride themselves on being closer to the real world then DC. Plus it is the same damn story that has been told 1,000 times. I thought Fraction was a fresh writer with new ideas, Stan Lee and Claremont have covered this ground over and over and over again.

From there we see the group gets stopped by the peaceful loving natives of San Fran and groups of mutants. Of course a riot breaks out and Norman Osborn uses this to bring in the Avengers and impose his will on the city. This is just inane story telling. The X-Men are so short sighted that instead of letting a peaceful protest that is against them just have their say, they want to confront it and start a riot. Also the first time this happens the “good guys” are lead by the Beast. Really, the Beast is a hell of a lot smarter then that. From there we tread water as character after character is introduced ad nauseam with Fraction’s irritating captions. A sample for your pleasure:


And it just goes on and on and on. I wanted to throw the book across the room.

The upshot of the story is riots break out; Norman uses it as an excuse to impose his will on the X-Men and gives Emma some secret plan. This is where the book gets even worse. The dialogue between Norman and Emma goes like this after he tells her Scott is not the leader the X-Men need.

Norman: “Someone with not just the skill..but the will.”
Emma: “Osborn this…I don’t understand what this means.” (She is looking at some papers)
Norman: (Gazing out a window) “Sure you do. Just use your imagination. And think very, very big.”
Emma: She turns, see something, close up of her eyes and says “Oh my”.

Come back for 4 more parts and an epilogue to see how this ends. Oh I will follow it since I still get what I consider the Marvel U spine books of New Avengers and Dark Avengers, but I’m not happy about it.

Of course no review is completed without talking about the art. If this was the quality and type of work that Mark Silvestri did when he started, he would not be a “name” artist. At this point he is living off his reputation. This was sloppy and if you check the credits it needed a ton of help to get 32 pages to the finish line. Nothing about it was special, from the layouts to the design of the pages, to the depiction of the action it was all very pedestrian.

Overall Grade D – To think that this is the best job Marvel could do with a major cross-over between the two big franchises they have, it is embarrassing. Thankfully they have plenty of good books out there as this stuff was just a waste of paper.
Posted by Jim at Wednesday, June 24, 2009