This issue of All New X-Men is by Brian Bendis and David Marquez was a pretty light read and was a breezy affair until we hit the end, then the sh*t hit the fan. 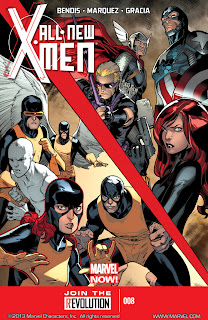 The entire story consisted of the new Angel and the old Angel. Or they can be called the Angel from the start of the X-Men and the current incarnation of the Angel. They end up flying around together and talking, battling some bad guys and being brought back to the Jean Grey School by the Avengers.

The crux of the story was the original Angel trying to determine what the hell happened to him to become the Angel he saw in front of him. To be truthful I’m not 100% sure what the heck the Angel is today. I know he was taken over by Apocalypse (in a way) and was killed by Psylocke and then returned as blank slate. He appears to have metal wings and apparently can heal people; this current version also does not have a past and is slowly developing into a person. The new Angel refuses to tell the old Angel what happen and the old Angel freaks out. He can’t take it anymore; he does not want to be in the future. Warren (old Angel) goes to the basement of X-Mansion and tries to access the time machine. His friends confront him and he is going off the deep end. He appears to be on the verge of a nervous breakdown, then goes quiet and is fine. Jean Grey used her newly discovered mental powers to alter his mind, a thing that sends a chill down everyone’s spine. It was a very good issue.

What the issue made me understand is that while I complain about not having any change the amount of change that has occurred to the characters is pretty dramatic. It is also a sad testament to the fact that comics are now strictly being directed at a totally different crowd than before. The advent of Watchmen and Dark Knight Returns forever altered heroes from being light and bright to being dark and gritty. This books, intentionally or not, is entertaining because it shows us how dramatically different comics are today from they were years ago. Also in the span of eight issue Bendis has to turn Jean Grey into a darker version to keep up the type of drama comics seem to crave today.

Taking them one at a time, let’s look at the changes.

Iceman has gone from being a teen-ager to being around 22 years old and he looks more like ice then snow. Okay in sixty years not much.

Angel went from being human, to being one of the four horsemen of Apocalypse, to being the next Apocalypse, to dying and being reborn as a blank slate, but still looks like Warren. At least he has died and been reborn which is essential for any good comic book character.

The Beast has gone from being a brainy beast like human, to being turned into a literal beast who has looked like a cat and now more of an oddly hairy blue man beast thing. Why he is blue I have never quite understood. The level of his genius has increased to where he is now proficient in any and all sciences. A prerequisite for any comic book genius and certainly needed by any group he is in. I don’t believe he has ever died and come back to life, which needs to happen soon as the Beast should be a more prominent character in the Marvel Universe.

Jean Grey went from Marvel Girl and died and came back as the Phoenix. Then the Phoenix died and then Jean Grey came back to life and we found out she was not the Phoenix. Then she became the Phoenix again and then Wolverine killed her. She and Scott Summers had two possible future children in Rachael and Nathan who are both currently super heroes in the present day. Not sure if I have that all right and let’s not even talk about Madelyn Pryor and the whole Goblin Queen, clone of Jean Grey stuff.

Scott Summers went from being a lonely orphan to having 2 brothers (hey where is the third brother anyway), space pirate parents, being absorbed by Apocalypse, being killed, returning to life, having future children with Jean Grey, moving on to Emma Frost, being the one with the Phoenix Force, killing Professor X, having his powers go wonky and now is leading what is being called a mutant terrorist group. Again way too much and I’m missing a thousand things and getting half of it wrong I’m sure.

The All New X-Men shows that these characters were much cooler when the baggage was not as heavy. They show that having someone who is young and new is more fun to deal with and have adventures with then the angst ridden characters they have become. The baggage is so heavy you can see their shoulders are being bent by the load.

I’m not sure we need to go back to comics as written back in the sixties because too often they were written too simplistically, but what this book shows is these used to be fun characters. The All New X-Men are better than the weighted down all old X-Men. Hell the continuity is so convoluted I’m not even sure who the characters are anymore. The original X-Men are like a breath of fresh air. Also this is one book I’m glad Marvel is publishing a thousand times a year because it is slow moving. By getting 8 issues in two days it helps keep the pace moving at a good clip. Hard to believe I’m enjoying an X-Men book and a book by Bendis where the dialogue does not stop me in my tracks.
Posted by Jim at Monday, March 11, 2013