Of course before we hit Batman Incorporated I need to provide the links for next week with Cosmic Comix listing here and Midtowncomics here. Next week has a lot of good stuff but the one book I’m really looking forward to is Sex by Joe Casey. Click here for a good interview with Joe as he talks about what the series is about and why he wanted to do it. Also coming out is Mara, Snapshot, Superior Spider-Man, Colder, Green Arrow, Age of Ultron and Before Watchmen Rorschach. I have noticed that my list needs some dramatic trimming as I have too many books on the list that are not being anticipated by me. If I can’t remember at all what happened in the prior issue it is a good chance it is a book to be dropped.

Okay that was a damn long preamble to the first part. 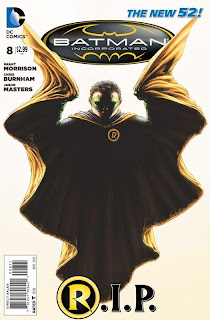 The character was suppose to have died sooner based on what I have heard from others who read various interviews with Grant Morrison, but for various reasons he survived a lot longer. I also read that some people feel he was a one note character, but I disagree. Damian added an element to the Batman books that have never existed before. Damian was the darker character and with Dick Grayson as Batman, Batman was the lighter character. Think about how clean and simple it was to do and Grant managed to flip the dynamic on its head in a fairly simple story. The story was an unknown son is raised by his mortal nemesis’ daughter Talia. She has raised him to be a master assassin and killer with her warped world view. Batman is presented with this son and then Batman dies, leaving Dick Grayson to take the mantle and a new Batman and Robin are born.

The franchise had been mired in the same dynamic for 70 years and Grant kept the core of the story and inverted it making the entire book have a fresher feel to it. Some of the Bat books fed off the dynamic. We also had DC do some horrible things in trying to play off what Grant was doing. The Battle for the Cowl and Batman the Return were both based on what Grant was doing, but showed that the main DC office had no actual clue what was going on. It reminded me of the weekly Countdown series that was supposed to be leading up to Final Crisis. I just keep thinking that Morrison tells them a detail or two and then DC thinks it is going to be one thing and Morrison has it going another direction. The desperation of trying to make great series into events has driven me to distraction and also made me take an internal pledge to never buy an ancillary tie-in again unless I’m getting the series or if the same writer of the main book is writing the tie-in.

The crux of the entire thing is that Grant changed the Batman mythology like no one done in a very long time. It was actually a dramatic change equal to what was done by O’Neil/Adams to make Batman back into a dark knight. The O’Neil/Adams Batman broke the mold the character had fallen into due to the comics code and the popularity of the sixties TV show. I would also say that this change was even more then Frank Miller imposed with Dark Knight Returns. The sad part of it is that the new 52 caused tons of changes to the Batman franchise and wiped out a lot of the context of what Grant was doing with the character. The Robin character is being framed as an internship to train young heroes and that is eroding the family feeling. Also Grant knows he is unable to actually kill Bruce Wayne so he was only able to make that a “reality” for a short period of time. That leads to the Damian story only being able to have one ending and that is his death.
That is the shame of what has happened because Damian was so young that they could have shown him growing up. Even over the few years (was it already seven?) we have seen a shift in Damian from who he was to who he is at the end. It would have been fun to let the character age over time and we could see Damian as a young man and how he could have been maybe a truer hero, but one that was darker then Bruce. Grant’s future stories gave us a glimpse of that idea.

Instead we are left with one of the great all time runs on Batman and a story that I will re-read over the years. The aftermath will likely lead to Harper Row as a new Robin or some other sort of surrogate but nothing that can impact the books like Grant did. The new 52 reset Barbara Gordon, wiped out Stephanie Brown as Batgirl, made Dick’s time as Batman appears to be a blip in time and has essentially destroyed the idea of an older Batman who truly learned to value his family.

The next few months we will see Grant wrap up his run, the other Bat books exhibit the angst of the death of Damian and in another year the story line will be an occasional reference and then eventually lost in time.

It is the nature of the beast with DC and Marvel that no one is willing to let characters grow old and move on to new things and one I will lament forever. That is why I will cherish this run and especially I will appreciate all that Grant had done prior to the wonderfully marketed new 52 that was poorly planned and ill advised. The impact to Batman was one where DC tried to fix what was wrong, but fixed what had already been repaired and made new again.

One thing I have to say is that I think Grant’s work which was being under marketed by DC is a superior story to what Scott Snyder has been doing with Batman. Of course the bottom line is that we are getting two great Batman books at the same time. I’m sad to see Grant leaving but like his run on Animal Man, Doom Patrol and X-Men these are stories to keep on my book shelf and being enjoyed over and over again.
Posted by Jim at Monday, March 04, 2013