In case you missed it, Thomm refuses to accept the fact that Lee is right. Again. 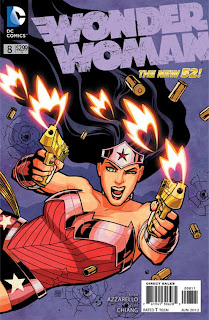 Thomm: Lee’s spent too much time around nuclear power and can’t get over that it hasn’t resulted in the development of a super power, so he’s channeled it into whining.

But back to our show. Azzarello’s Wonder Woman has writing that is far more clever than any I've seen in previous iterations of Wonder Woman. The various characters often employ sophisticated, knowing double entendres, not the juvenile sexually oriented, high school sort more often seen. These folks are referencing long histories with each other and the always biting interactions they have. Saying the dialog is akin to 100 Bullets isn't necessarily off, but it isn't a negative criticism, either, as far as I'm concerned. A level of sophistication not previously seen in Wonder Woman scribing isn't a bad thing.

Lee: Saying the writing is cleverer (a better word for us!) than other WW iterations isn’t a fair statement. If you say it’s better than the WW written in the past 5 yrs I would probably give it to you. But I would disagree with any story written before 2006. For example, Greg Rucka wrote WW from ’03-’06, Byrne before that, Messner-Loebs before that, and Perez before that. You can make the argument that the stories were more classical superhero stories but not that the writing is better.

This is one of DCs big three series. This is supposed to be a gateway book to world of superheroes. In terms of dialogue, there’s a difference between sophistication and making WW sound like a man. I expect Batman to be slightly dirty and grimy because of the movies. Batman is dark and brooding. I get it. Wonder Woman should be more in line with Superman as a bright, shiny book full of good natured people beating each other up. It’s Wonder Woman so I expect a certain amount of boobies but I don’t expect to see Hera running around naked issue after issue. If you want to make WW dark and grime and “sophisticated” then make it a Max title ala Marvel’s line and let people go crazy.

Thomm: I can’t comment on the Rucka, Byrne or Messner-Loebs iterations because I haven’t read them, but from your description it sounds a lot like the old style superhero dialog of days past. Having recently re-read some of the heralded books of the early ‘80s, I can’t lament the passing of that style of dialog. It’s stilted. It’s repetitive. Curiously, it’s written for single issues, which you think make Azzarello’s version appear better than it is even though his version is written more for a trade reading.

The Big Three issue is just dumbfounding to me. Diana is a kick ass warrior from an island composed almost entirely of warriors. Why wouldn’t she “sound like a man?” She ought to sound like a jet fighter pilot who is tops in her field of battle. She is one of the best warriors in her culture, if not the best. She surely shouldn’t talk like Superman, a guy who was raised to be a Boy Scout by his doting parents in the idyllic agrarian middle America, a sort of Jeffersonian paradise (if he’d ever gotten around to freeing the slaves without bankrupting his estate).

The larger point I was trying to make with my Big Three comment was that this should be tamer, or less edgy, than it is. I consider WW one of those gateway books that should be accessible to everyone on all levels. This book is not that. The story is geared towards the edgy audience. It’s geared towards those that want real adult action, stories, and all that encompasses. WW is one of those books that any woman, or young girl, should be able to pick up and enjoy. Hera walking around naked all the time is not that.

Thomm: What? As far as Hera appearing naked, it’s not like we’re seeing any of her “naughty bits.” Those are always strategically obscured. We know she’s naked but we don’t see her naked. And why shouldn’t she be? She’s the goddess of women and motherhood. She’s extremely jealous of her husband’s infidelities. Why wouldn’t she walk proudly, nakedly, but for her peacock feather cloak? It shows her pride in her appearance and her feeling of superiority. It’s not like you’re objecting to Poseiden appearing as some sort of giant mutated fish or Hades as a boy with lit candles on his head. Neither of those are traditional depictions of those deities, either. I love the innovation in these portrayals. Hell, why not object to Apollo incinerating his muses or Ares appearing tired and weak? I think this level of creativity is a much better gateway than the same old lame portrayal of Diana that we’ve had for years now. From what I’m reading in Jim’s JLA reviews, Wonder Woman is just that lame in that book. The same old superhero approach is not going to bring in new readers.

Lee: You state the fact that Hera walks around naked as if every woman does that. I think that is far, far from reality. It makes the book very… sexist. That’s not the right word but it makes the book very much a male fantasy book. I would argue that it’s far more offensive to a larger portion of society than bad dialogue. I can give someone a book with some cheesy words and it’s ok. I can’t give everyone a book full of naked, no matter how “covered”, and get the same level of acceptance.  WW is a book that you should be able to give to an average person and have them enjoy.  If said person enjoys lots of violence and titillation then there are plenty of other books that I can start with.

Thomm: But let’s get into the great characterizations of Ares, Apollo, Poseidon, and Hades. Ares is a broken god, weary of his interminable existence. Apollo is a cold manipulator. Poseidon is full of righteous rage, quickly diverted into amusement at Diana's manipulations, while Hades is petulant and vengeful at the same manipulations. These are fully fleshed characters, no less or more so than Diana.

Diana goes from her initial regal appearance with Zola to banter with Hermes to outrage at the disclosure of her true heritage. She also feels guilty for not being present when Hera transforms her mother and the warriors of Paradise Island. She's quick witted enough to alter her plans when the confrontation with Hades and Poseidon doesn't go as planned, too. Deus ex machina she's not.

Lee: I have to admit that I liked the characterizations of all the Greek gods. It was interesting and they moved the story forward as needed. Although the presentation of Hades was very interesting and I’m not sure how close that was to the myths. But, it was different and I was willing to accept it. I really liked Ares as old and tired. I agree with you there. But, they were villains, or tertiary cast members. What about Zola? Remember her, in issue six she has SIX dialogue balloons, 3 of which have one word in them. She is the reason Diana is in this situation and she has no personality. That’s not true, she’s a brat with little to no social skills. If I replaced Zola with a singing sword or some other inanimate object would the story be any different? I think not. 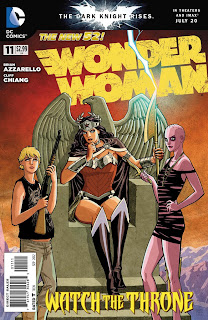 Thomm: Again, I disagree. Zola’s very lack of discretion in sexual partners is a key mover in the story. It sets Hera after her in the first place. Her decision to grab onto Diana so that she’s returned to her farm with Diana in the confrontation with the centaurs is also important. Inanimate objects aren’t going to do either of those things. Yeah, she’s something of a cypher, but, again, this is not her book. I don’t want to spend significant time exploring her history in this first chapter. I want to know about Diana. We have lots of that. It even comes back around when Zola stays where Diana told her in London, but Diana has to come back to rescue her when the centaurs show up again. Zola did what she was told. She wasn’t a brat who continued to confront Diana without reason. She learned something in that first issue but still wound up in danger.

So, after having re-read the same issues that encompassed the trade Lee read I think we read two different books. I see a great start to what is a very literary endeavor. Lee sees something significantly divergent from the superhero history that the character has had. I think that’s akin to objecting to Miller’s The Dark Knight Returns because it wasn’t like what had come before. Not that Azzarello has reached that level. And I’ll grant that The Dark Knight Returns wasn’t set within the DCU proper, but its influence clearly altered the Batman character in the DCU.


In conclusion, I don't think that Thomm or I managed to change each others minds but hopefully we clarified our viewpoints for y'all.  If it reads choppy, well that's the trouble with trying to have a debate via email.
Posted by Lee at Thursday, March 21, 2013