The last part focuses on two big releases and a few notes on change in the world of comics.

I don’t know about the rest of you, but I can read stuff by various writers over the years and for one reason or another I miss some of their work. Then all of a sudden I notice who they are and I have a desire to read more of their material. A few weeks back I read Milkman Murders in a hardcover collection. This book is a sick and twisted look at the proverbial American family and plays with the whole concept. It then turns it on its head and into a horror story of epic proportions. It is both disturbing and entertaining all at the same time. Of course it might be just due to my own warped perspective, but I know Lee enjoyed it to, as you can see here. The book is written by Joe Casey, so I read Sex #1 written by Joe Casey also and I now ordered Volume One of Godland and the hard cover of Butcher Baker, The Righteous Maker all by Joe Casey. Joe has been writing comics for a lot of years and I can’t say I remember anything of his standing out before until I read Milkman Murders and Sex #1. What sold me to try out these other books was reading his back matter material and the buzz I had picked up on the two books I ordered. I have both are very good in very different ways. Note to Joe Casey, email me at jmartin1955@gmail.com to do an interview.


Sex is about a super hero who is returning to the city and back to his corporate empire after being gone for a period of time. He is swearing to not be a super hero again but finds himself in a high end whore house apparently run by a former villainous foe. I got the vibe of a Batman style character that walked away from it all. He is back for reasons of his own and goes to the whore house owned by the former Catwoman. There is a lot more to it than that and the story has a great vibe to it. I’m anticipating learning about why he quit, why he is back, who was the old women he was speaking to as she was dying, what is Saturn City like and what was his relationship with Annabelle. Yes it has a few of scenes that are very graphic as Simon Cooke (the central character) watches two women having sex with each other, but that lets you know anything goes. In a market that is now skewed to adults we have been squeamish to get direct with sex in comics. Evisceration and all other many of blood and guts have become normal but sex is hardly touched on. The artwork by Piotr Kowalski was very good. I would describe his work as above a cartoon style and not photo realism but a clean and light line.

A final note is Joe Casey in his back matter basic talks about the best stuff is going on in the alternative publishers, a better word then independents. His remarks are that Marvel and DC are so stagnant that he finds it hard to believe almost every blogger and others he reads still have Marvel and DC dominating what they talk about. I’m certainly guilty of an over focus on Marvel and DC myself at times; it is like we are all locked into a death spiral. Heck out of everything I have read this week Sex was the best of the week. In defense of the cape and cowl set, Joe’s work is building off our familiarity with that genre to tell his story. It speaks of an obvious affection that Joe has for the material. I think that stagnation is what causes writers to try and do as much as they can to change things up. Tying the first two parts to this diatribe, Animal Man and Swamp Thing wanted to change the characters in a profound way going forward. I guess they succeeded, but DC can hit the reset button at anytime. Bendis is trying to change the X-Men but bringing the past to the future. Certainly an idea that can only work in a comic book and is fun, but still not real change. In Sex, Saga, Invincible, Fatale, Stumptown, Rachael Rising, Scalped and other alternative press / creator owned material anything can happen, heck a character might actually grow old and die one day. 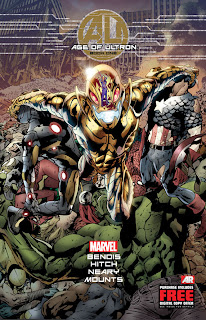 Now Age of Ultron #1 by Brian Bendis and Bryan Hitch was pure Marvel Comics. Of course I’m confused as all get out as it starts out saying we are in the present day and the world, at least New York is under the control of Ultron and the Avengers are now an underground resistance. I just finished reading the Rotworld 40 issue story which was an Elseworld tale and they came back to the present and did a twist that “changed” things forever. I think Marvel is setting up the same thing and this is some alternative future or whatever and it will be fixed at the end and affect some “change” that will forever alter the world as we know it. Jaws will drop and things will never be the same. I’m treating it as another comic story and if told well with great super hero style artwork I will enjoy it. Maybe I’ll hold onto the issues and sell them on Ebay.

All the companies love the events and making changes. Of course then they change it again and again and again and again. If it goes too far, they hit a reset button or they just ignore and drop a story line. I still hope one day they realize that the name is what they own. Batman does not need to be Bruce Wayne, Mister Fantastic can by a grown up John Storm, a hero can become a senior statesmen and the new version can be in tune for the next generation and be more enjoyable for even me. I rather see Connor as Green Arrow then Ollie, Dick as Batman and on and on. The JSA showed the way as the next generation of Mr. Terrific, Sandman, Dr. Midnight and Dr. Fate were all very cool and more exciting than their predecessors. They kept Flash, Wildcat and Alan Scott still hanging on as the senior staff. Instead we get rotating Robins and Dr. Ock as Potto Parker for change. Heck the only mystery in Spider-Man is when Peter Parker gets his body back not if.

The desire for meaningful change is palatable in what writers try to do and the frustration of dealing with intractable corporations is driving some of the best talents into the alternative press. It could be a win/win for us as Marvel and DC will have to give more new voices a chance and the best will concentrate on Fatale, Sex, Massive, Walking Dead, Saga, Rachael Rising and more.

A late add, I finally got the chance to read Hawkeye #8 by Matt Fraction, David Aja and Annie Wu. This was a brilliant issue and read all the better because Matt did not do it with the annoying out of sequence story telling gimmick. The Annie Wu fake comic books covers were a nice touch to the story and could be called a gimmick, but it worked. Fraction is moving up the charts in my mind as a great writer and of course David Aja's art is a joy. I was thrilled to see Matt did this in a straight line and trusted how good his story is that it did not need the time jump stuff. Of course maybe the Annie Wu covers were the gimmick this issue, but truthfully Fraction is a better writer then needed tricks to tell a good story. As for this not being who Hawkeye is in other comics, it just goes back to any character who stays too long and has too many writers becomes whatever any writer wants him to be. I'm enjoying this book and will accept this as the new iteration of Clint Barton.
Posted by Jim at Tuesday, March 12, 2013