To round out the week let’s do a few quick hits on a bunch of books. 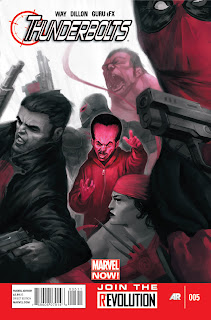 Thunderbolts #5 by Daniel Way and Steve Dillon is an okay book, but one that I find is losing my interest rapidly. First off I skipped reading the recap on the front page and I was totally lost in the story. If a need a recap to get me back up to speed it often means a comic is not holding my interest. Second the whole scenario is that the Thunderbolts are in the country of Kata Jaya to take out General Awa, too many “A” and too many made up names. Finally we are on issue #5 and we end with Frank and Electra making out, Deadpool watching and being jealous and I believe the de-powered villain the Madman being happily taken by venom to see General Ross. The characters feel out of character. I like Dillon’s art and I like some of the characters but the book is not giving me a sense of why it exists. I’m debating whether to get the next issue of not. 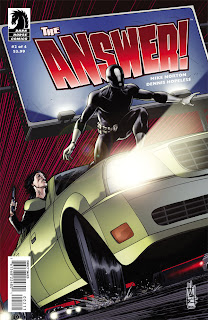 On the other hand The Answer #2 by Mike Norton and Dennis Hopeless is just out and out fun. The Answer is fighting bad guys dressed in scrubs left and right and the action is almost non-stop. Devin MacKenzie, the girl The Answer is protecting, is snatched by a group who is trying to convince her they want her help being part of a group of futurists. They claim to not be associated with the bad guys, but it is apparent they are the same group. I liked that Devin is not buying the story that she is being sold, but understands that she needs to acquiesce due to circumstances. I hate when a character is suppose to be as super smart as Devin does something anyone else would think is stupid. Plenty of questions about whom and what The Answer is and what the organization is about to keep you in the story. It is a wonderfully fast paced story that I have enjoyed from the jump. 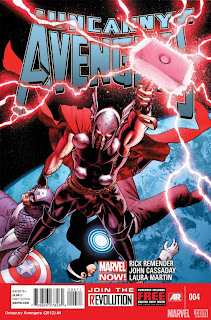 So the Uncanny Avengers #4 wrapped up their first story arc pretty fast. They beat the Red Skull, but he escapes. The group is beaten up and Havok question his leadership ability. Cap comes in and tells him that the Avengers Unity Squad is in good hands. Who knew the Avengers had a Unity Squad. Uncanny Avengers is a better name then the Unity Squad Avengers. Rick Remender is setting us up for a long story line as he has done with other books; the opening arc is just setting the stage. I know John Cassaday can’t carry a monthly book, so I wonder who is on the next arc. Hard to be the other artist in a rotation that has Cassaday in it. The most interesting part of the book was the three month time jump showing Havok, Scarlett Witch and Sunfire on the run. On the last page we see Onslaught – the horrendous villain that set off the whole horrible shifting of Marvel heroes to a different world. Image took over some Marvel titles and then they had the whole heroes return stuff, if was some horrible crappy stuff. Can Remender make a horrible idea seem cool? I give Rick credit he will pick up almost any old story line and take a whack at making something lame cool. Just don’t go back and read the original stuff because it was bad and not worth your money.


Before Watchmen Dr. Manhattan #4 (of 4) by JMS and Adam Hughes was a good ending. I need to re-read Watchmen because this issue actually went past the end of Watchmen. The artwork by Hughes got better and better with each issue. He is a very good artist but he has not done interiors for a long time and I felt that each issue was better then the last. We only have three more BW books left and it is over. My favorite material from DC is concluding and nothing on the horizon looks as good. 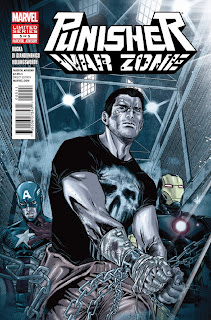 Punisher War Zone #5 (of 5) brings the Frank Castle story by Greg Rucka to an end. It is funny because Frank ends up in prison to help Sgt. Coles escape with Wolverine’s help. The Avengers put him in an escape proof prison which confused me a little since General Ross managed to find Frank over in Thunderbolts and he sure as hell was not in prison. I know continuity is not all important, but I get the feeling if Daniel Way had picked up the phone and called Greg he would have know how this series ends and built a better bridge. Greg pulled off a great story of the Punisher fighting the Avengers and essentially winning and made it seem “believable” in comic book terms. The Punisher character has had three great takes done on the character in recent years with Ennis, Aaron and this run with Rucka. Each different from the others and yet all true to the core of the character. Greg Rucka continues to impress me with his work as his writing seems to get better and better over time. At some point certain writers are better off leaving the big two to develop their own creations, but I’d be happy to try any book with his name on it no matter who is publishing the book. 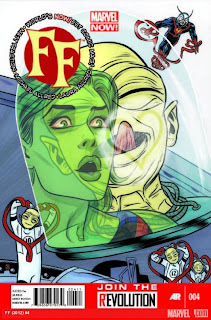 FF #4 by Matt Fraction and Mike Allred is one hell of a fun ride. I also keep getting the impression that Matt is using stuff from the first ten issues of the FF for fun. The reference to Miracle Man and they already fought the Mole Men, now if they have a run in with Kurrgo I’ll know I’m right. It is a totally offbeat book and the Allred style adds to that feeling. I’m sure many super hero comic fans are running away from this book, but I love it. This issue was a Young Romance novel about She Hulk and Wyatt Wingfoot. The jealous Moliods with help from Bentley-23 try to sabotage the date and end up making it better. In the span of one issue Matt touches on almost ever single character in this large cast and tells both a fun love story at the same time advancing the plot. Nothing is what it seems and I can’t wait for the next issue to see if Medusa is actually a Machiavellian bad guy or just doing her thing her own way. Finally so many of the Marvel books have the AR symbol and often I don’t bother to check it out. Matt Fraction is actually giving us some creator commentary and is also having some fun with it. Where many books have very lame and pathetic AR, Matt is involved with making his book the best it can be. 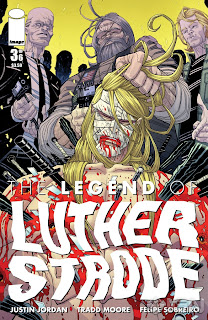 The last book I will mention is the Legend of Luther Strode #3 (of 6) by Justin Jordan and Tradd Moore. I liked what Justin said in the back matter that he doesn’t subscribe to the theory that the characters write themselves, but agreed that once you establish a character the story needs to be true to that character. I think that says it better then the shorthand versions that they write themselves. So often in Marvel and DC books a writer has a story and cast the characters into roles. Those character have to act out like he wants his story to work regardless and whether the actions are true to who the character has been established to be. Worse, the DC and Marvel heroes have been around so long and so many writers have done so many things to them; there is no consistency to the core of the character. Anyway this book was wall to wall violent and gory action as Luther is going up against others who have his powers. I like that we don’t have a true sense of whether Luther is a hero or a Punisher type or something else. I get the feeling Luther is learning who he is as he goes along, like we all do.

Okay that puts another week to bed, thanks for reading.