Indies Previews for May Pt 2 of 2 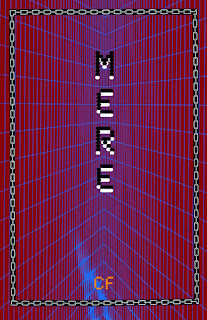 Mere GN by (w/a/c) C.F.
In 2012, Providence-based artist and musician C.F. began to produce a series of more than a dozen mini-comics, which he distributed via Twitter. Each mini-comic offered a take on, and expansion upon, a classic comic strip genre-from crime and sci-fi to punk and sex-all of them infused throughout by C.F.'s absurdist humor and loose improvisatory drawing. Less than 50 copies of each mini-comic were printed; needless to say, they sold out instantly. Collected here for the first time, they constitute a kind of bravura display of C.F.'s dexterity with pen and ink.180 pgs, PC, 5x8.5, $19.95. Visit C-F here.
Lee: “Mini-comics distributed via Twitter”… wow! Talk about a whole new self publishing venue. It’s a collection of mini-comics so the material will be out there but I have no doubt that it will be interesting.
Thomm: Having seen one page only of the internal art for this, rough would be a good description. Maybe it’s interesting. I’m not taking a flyer on it, though. 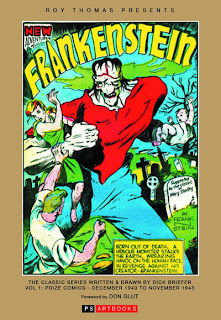 PS Artbooks
Roy Thomas Presents: Frankenstein by Dick Briefer Vol. 01 HC
Dick Briefer's Frankenstein for Prize Comics is widely regarded as being America's first ongoing horror series. Indeed, it was Briefer's work that probably caused the creature to be actually named as Frankenstein instead of the nameless monstrosity from Shelley's novel. Splitting the stories between two stools-humor and horror-Briefer's tales are absorbing and unsettling in equal parts. Some of the humorous material has already been reprinted, though not necessarily in order nor in total. Until now, of course! Reprints Prize Comics stories from December 1940-November 1943 288 pgs, FC, 7x10, $47.99

Lee: I’ve just about had my fill of GA material and was all set to stop adding to the collection until this showed up. Dick Briefer was one of the greats and was a master storyteller and artist. This material is gorgeous to look at and is still readable today. Highly recommended if you have a little extra cash.
Thomm: Not a big GA fan, but this does look good. I can’t help but wonder why the good doctor didn’t give his creature a nose, though.

Taschen America
Little Book of Butts SC
The original Big Butt Book featured a great cross-section of delectable rears from the 1950s to the present day. Here, The Little Book of Butts pares the original content down to just the biggest and the best and added in about 30 new photos. Now in these 150 photos you'll see the big and the bountiful, then the bigger and more bountiful, in black and white and in color. 192 pgs, PC, 5x7, $9.99
Lee: Yeah, well, there’s no redeeming reason to pick a book like this. Let’s just say it caught my fancy.
Thomm: Um, we’re men who like women. That’s reason enough. Hooray objectification? 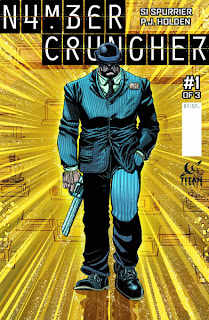 Numbercruncher #1 (of 3) by (w) Simon Spurrier (a/c) P. j. Holden
Dying young, a brilliant mathematician discovers a way to cheat the terrifying Divine Calculator. He schemes to be endlessly reincarnated in the life of the woman he loves, no matter how often the violent bailiffs of the Karmic Accountancy cut short each life. It falls to one such Karmic agent - the surly Bastard Zane - to put a stop to the time-twisting romance once and for all, before the mathematician can pull off his greatest trick and escape Existential Justice forever! 32 pgs, FC, $3.99 See preview pages here.
Lee: Spurrier is one of my favorite Brit authors so I am always on the lookout for new material from him. I’m not worried about this being entertaining at all. As for Holden’s art, based on the previews, I’m not worried he can draw pretty pictures either. This is an easy winner.
Thomm: I like the premise more than the art. What the hell’s with that pistol on the cover? It’s bigger than the guy’s femur. Top Shelf Productions
From Hell Companion SC by (w) Alan Moore (a/c) Eddie Campbell
From Hell occupies a monumental place in the history of the graphic novel: a Victorian masterpiece of murder and madness which has won numerous awards, spawned a major film, and remained a favorite of readers around the world for over two decades. Now, Top Shelf Productions and Knockabout Comics present The From Hell Companion, an astonishing selection of Alan Moore's original scripts and sketches for the landmark graphic novel, with copious annotations, commentary, and illustrations by Eddie Campbell. Here for the first time are a set of pages which have never been seen by anyone except Moore's collaborator. Joining them are Campbell's first-hand accounts of the project's decade-long development, complete with photos, anecdotes, disagreements, and wry confessions. 288 pgs, PC, 7.5x10.5, $29.95
Lee: I can’t even begin to think how much detail this book is going to have. When I read From Hell, I read a page, then read the notes, read another page, read more notes, and so on. It was incredible the amount of research that went into that project. If you are curious in the least about Jack the Ripper then this is going to be a must read. If you have wondered how much work a writer does when it comes to historical fiction, then this is a must read.
Thomm: Disagreements? Who could possibly have a disagreement with Alan Moore? 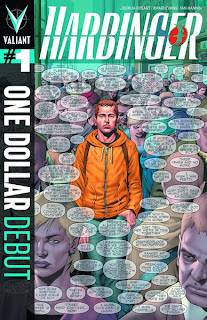 Valiant Entertainment
Harbinger #1 (VU) (One Dollar Debut edition) by (w) Joshua Dysart (a) Khari Evans (c) Arturo Lozzi
This issue reprints Harbinger (2012) #1. Jump into all of Valiant's ongoing series for only a dollar apiece! Just in time for Valiant's one-year anniversary and Free Comic Book Day 2013, Valiant is proud to announce a new line of reprints, re-presenting the sold-out first issue debuts of the series that launched the all-new Valiant Universe.32 pgs, FC, $1.00
Lee: It’s only ONE DOLLAR! This is an excellent price for an excellent comic. Please note the first issue sets up the premise and you don’t get a ton of action but it’s just so perfect that you’ll want more when you are done. This is far and away the best of the new Valiant line. Actually, it’s better than half of DC and Marvel’s output.
Thomm: Yeah, it’s only $1, but I’m not getting much story and issues 2-12 aren’t being reprinted, so I’m better off getting the trade or HC, it seems to me. 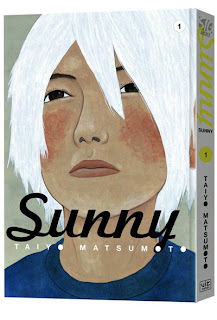 Viz Media
Sunny Vol. 01 HC by (w/a/c) Taiyo Matsumoto
What is Sunny? Sunny is a car. Sunny is a car you take on a drive with your mind. It takes you to the place of your dreams. Sunny is the story of beating the odds, in the ways that count. It is the story of beating the odds, in ways that count, for a group of orphans who discover the car and let it take them to better places in their imagination. Sunny is the brand-new masterwork from Eisner Award-winner Taiyo Matsumoto, one of Japan's most innovative and acclaimed manga artists. Translated by Tekkonkinkreet film director Michael Arias! 224 pgs, PC, 6x8, $22.99 Read the first chapter here.
Lee: Aaahhhh, darnit. I saw this and said I wasn’t going to order it. Don’t get me wrong, I loved Tekken Kinkreet (both movie and book) but I was gonna hold out on this because I have 4 other books by Matsumoto. That’s enough for anyone’s collection. Then I read the first chapter. Then I remembered it was a fancy hc and now I am ordering me a copy. I tried to hold out. I failed. I won’t regret it because I know it will be good.
Thomm: Eh. Not a manga fan. Mixing that with stories that take place in the mind isn’t upping the appeal. Too much chance of “anything goes” for stories set in someone’s mind.

Thomm: I think this whole post was a cover for Lee to be able to put up a picture of a nicely curved butt. Don’t let him hoodwink you, though. Pick something to read out of this list, like Journalism.
Lee:  Well that worked.  I picked 14 books and the most remembered is the one about butts.  If that doesn't say something about the male mind...