Hi, everyone.  I'm on Spring Break this weekend, spending time back home in Virginia to celebrate Easter with my family.  So, I have a special Easter-themed message today.  It's the kind that doesn't involve bunny rabbits or chocolate, so if that sounds offensive to you, then please read no further.  I plan to talk about comics next week.

Now, Easter Sunday isn't until tomorrow, but that's okay, because the picture my 4.5 year old son, Matthew Jr. (aka "Manny") drew is perfect for commemorating TODAY, the transition time after Good Friday. 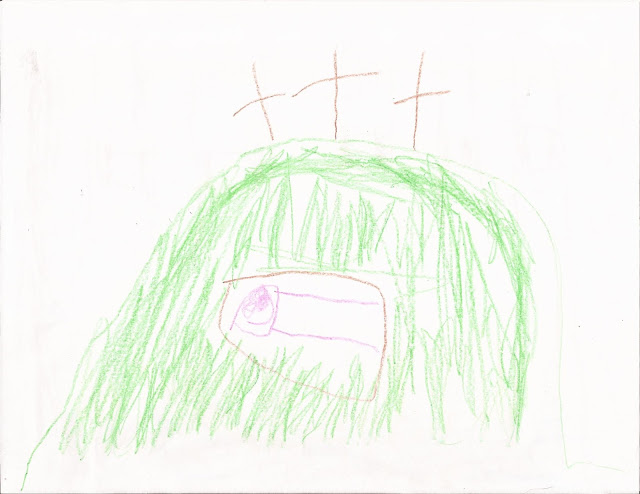 Now, I know at first glance this looks remarkably similar to a Teletubbie Bye-Bye hole, which is funny because I don't think he's seen that show since our summer vacation in Kansas (I do believe he may have a photographic memory though).  I drew tons of Bye-Bye holes with Laa-Laa holding a balloon and an ice cream cone for my oldest daughter, Charlotte (now 16), which was the beginning of her artistic endeavors.

Back to the picture.  The empty three crosses sit atop the tall-grass covered hill of Calvary.  Beneath them lies the tomb, which isn't empty...yet.  Jesus is lying there already clothed in his sparkling whites, just stretching his legs with a HUGE smile on his face.  It reminds me of some verses from a song that was sung by Dallas Holm and Praise:

Go ahead, drive the nails in My hands;


Go ahead, mock My name;
My love for you is still the same.
Go ahead, and bury Me;
But very soon, I will be free!


Manny didn't stop there.  He also drew on the back: 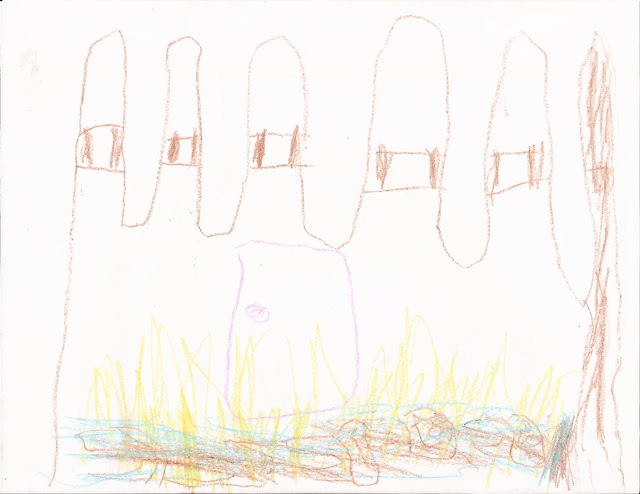 Uhmmm...We had to ask him to explain it to us.

He said it was Heaven and those were all the rooms that Jesus had prepared for us. Simply Beautiful and theologically rock solid!  It reminds me of the new ApologetiX song off their Hot Potato Soup album with Lyrics by J. Jackson:

He's back and I'm hopin' you'll find Him
He's livin', He's comin', He lives for me
Says that we should teach the nations about His salvation
Jesus died and He rose – I believe
And it makes me smile, hope it does for you
To 27 Matthew come and we'll review
Jesus died and then the earth moved
Temple curtain was ripped and then divided in two
When it seemed as though things were gonna get worse
Brothers came alive that belonged in a hearse
There's a lot of people in their graves
Who came out and they was raised, I said

I believe that the man named Jesus rose
I preach 'cause it's real and not just a feeling
I believe and my faith it grows
And before I close, you may be bright
But when it's the truth, it's real
And I could die and I would be all right, all right
And when complaints come in from anyone nasty
Who tell us that it's just an idiot myth
On the verge of being a lie
Now I shrug 'cause truth survives
Though they choose to carry out jealous threats
Scornin' Jesus and bustin' heads
That little-read passage in Matthew says
That up around the bend we'll break out of our caskets
Sprung -- not as zombies or as ghost men
But as something that's more than human forevermore
If I get buried underground
Not scared -- I'm not stayin' down – oh, no
My Lord's runnin' my life
He's got my tombstone knocked down with a smile
And I will be all right, all right
That was something else
When He gave you His life, baby
That was something else
And now Christians ain't afraid ... to die
To die, to die, to die!


See, the smile theme persists and I hope you (if you were curious enough to read this whole post) have a reason to celebrate tomorrow as well.