I try not to use the Comic Covers Sunday's post to make fun of old comics.  There are plenty of bad covers out there and we've all seen them.  I'm not saying it never happens, just that I try not to.  I wasn't sure what I was going to talk about this week until I stumbled upon the end of the World's Finest series.  This was just before the first Crisis series and DC was in a rut.  I was all prepared to make fun of these books... and then I looked at them.  There are some really interesting ones.  Then as it got close to the end and, well, let's just say they deserve to be made fun of. 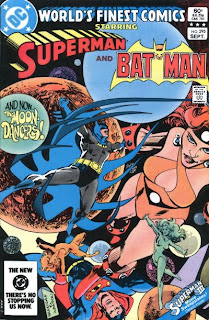 World's Finest #295, September 1983
Pencils: Ed Hannigan
Inks: Klaus Janson
I know, I said wasn't looking for humor and here I am starting with the Moon Dancers.  It's a silly cover with Batman strapped to the moon.  Silly but lovable. 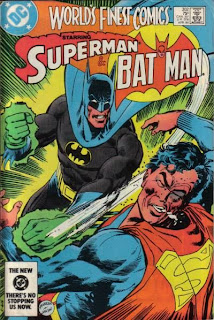 World's Finest #302, April 1984
Pencils: Ed Hannigan
Inks: Klaus Janson
Almost 2 years before Frank Miller made it the punch heard round the world, Batman was using kryptonite gloves to beat the snot out of Superman.  I just don't know enough about DC during this period to say if this was a regular occurance or not. 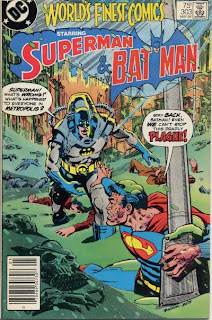 World's Finest #316, May 1984
Pencils: Ed Hannigan
Inks: Klaus Janson
If you haven't noticed, Hannigan and Janson were turning out some great covers by this point.  The previous selection was over the top dynamic.  This one has a great creepy vibe to it.  They were just on a roll. 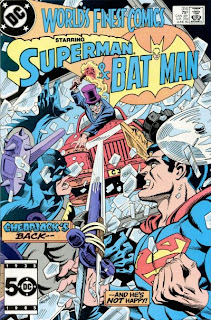 World's Finest #316, June 1985
Pencils: Paris Cullins
Inks: Rick Magyar
Amd then Hannigan and Janson left.  This cover isn't terrible but the villain is Cheapjack.  Cheapjack????  That's the best DC could come up with.  A dude who tapes kitchen knives to hammers as his weapon of choice.  Oi, this is bad.  Actually, I think it's made worse because it's the SECOND appearance of Cheapjack. 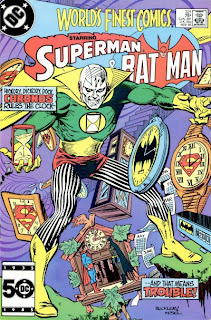 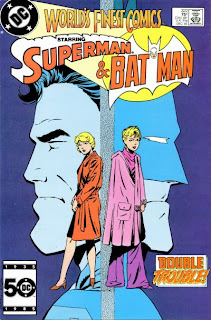 World's Finest #322, December 1985
Pencils: Keith Giffen
Inks: Karl Kesel
And in their personal lives, Superman dates a girl who dresses in a flasher treachcoat.  Batman dates a frump with one arm.  This is not Giffen's best cover.

That's it for this week.  Now go outside and enjoy your weekend.
Posted by Lee at Sunday, March 17, 2013