As you noticed we changed the format of the blog. There are a bunch of options for how you view it and by scrolling down you can see a heck of a lot more posts on the front page. On the right side bar are other buttons that will pop out on certain browsers. I’m still not sure how to get the little preview to look right, but we are just playing with format for a little while. Let us know if it sucks or not.

This week I want to focus on just a few books and use them as a springboard to talk about more general themes. Of course before I jump into that we have to hit the list for next week’s books. The clean and simple list from my friends at Cosmic Comix is here and the detail listing from Midtown Comics is here. A brief side not Cosmic Comix is holding its Cosmic Comix Madness again where a comic character duel takes on the form of the NCAA tournament. This year the showdown is between the best female characters in comics, great stuff and anyone can go and vote, click here. Some of the titles I can’t wait to read next week are Todd The Ugliest Kid, Where is Jake Ellis, Walking Dead, Batman and Robin, Before Watchmen Ozymandias, Age of Ultron and Wolverine. 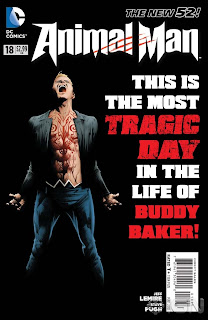 The first books I want to focus on are Animal Man #18 by Jeff Lemire and Steve Pugh and Swamp Thing #18 by Scott Snyder and Yanick Paquette.

When these series first started I was excited about the books. Lemire and Snyder are both favorite writers and the characters are ones that can be interesting with the right type of stories. Although Swamp Thing is a hard character to make interesting I figured Snyder could make it work. Animal Man is a little easier and I had faith Lemire could do wonders with him. After essentially 20 issues of each book (counting the Zero issues and Annuals) we finally reached the end and it and it left me cold. I followed the whole darn thing and the pay off was not there. Even the death of Cliff (Animal man’s son) felt hollow. The only “death” lately that has felt like it had an impact to me at all was Damian, but that is because I liked the character.
One of the new DCU problems has been the never ending story line. It is okay to continue to build a character over time and have sub plots and threads that pay off deep into a writer’s run on the book. It is not okay to tell one long story over 18 months. Batwoman, Animal Man and Swamp Thing all did and I’m turned off on all three series. I’m dropping Batwoman, see no reason to follow Swamp Thing and I’m iffy on Animal Man. Marvel has similar problems with some writers and I name Hickman as a major offender. I eventually fell off his FF run after he finally had old Franklin save the Universe, but it took years (actual YEARS) to get there.

Have an adventure, a battle with a villain, fight against some personal problem and do it with a few issues but have an ending and build on the underlying character as you go along. Way too many writers are writing novels that go on forever. Scalped was a 60 issue book that had endpoints and even one shot stories as it told the tale of Dash Bad Horse that should be the model for a long story not one long 18 issue story.

What is even worse is I read an article on The Beat that said the writers wanted to do something that would impact the series going forward and have a meaningful change in the dynamic of the book. I almost fell off my chair laughing. DC has just hit the re-set button less than 2 years ago and is still constantly changing the past continuity. There is not a hard and fast continuity in the DCU. Before the reset it was always a little squirrelly, now it is just a joke. I think Mark Waid said it best that when you are writing for Marvel or DC nothing you do will leave a lasting imprint. Mark made Wally West into a great Flash, poof that is all gone. A writer can’t make a lasting impact because the characters are in never ending stories. So when the next writer picks up Animal Man and he talks it over with the editor, Cliff is brought back to life by Maxine who is a powerful person in regards to the Red. She saved Cliff, but since she was so young she accidently put him into a comatose state that appeared to be death. In Swamp Thing it is even easier. Meaningful change is an oxymoron in the world of DC and Marvel. I hate that it is the case, but I have now come to appreciate good story arcs that I like and try to move on after they are over.

I see Grant Morrison’s work in Batman as a great seven years or so, slightly marred by the new DCU being launched in the middle of it. I still wish we had continued forward with Dick and Damian as Batman and Robin for a decade or so and seen where that took us. Instead we are back to Dick is a 20 something, Barbara has never been Oracle and the changes go on and on. Meaningful change is a fantasy that I’m sure every writer wants to be able to say they have accomplished with a character but the corporations that own them will fight against any true change. 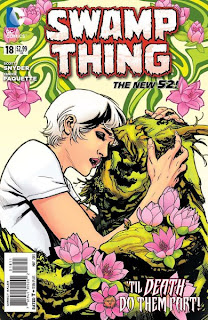 My big problem is that the Rotworld 40 issue epic actually was a miss for me. Lemire and Snyder had not had a clean miss for me with anything else yet, so it was hard to take. Of course any writer worth his salt who produces a massive quantity of work can’t hit a home run every time. I can’t think of a single writer who has been perfect on every story they have every done and I don’t expect that I will like every piece they write. This is a commercial endeavor after all and when you have to produce material on a deadline sometimes you have to let it go before you feel you have done your best. Especially at DC right now where being on time has taken on paramount importance.

Does this mean I’m not looking forward to other projects by Snyder and Lemire, of course not. When I see those names as the writer, it guarantees at the bare minimum a three issue try out.