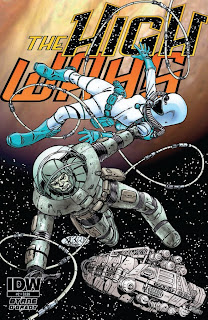 I just finished reading Highways #2 (of 4) by John Byrne from IDW. I have been critical of Byrne’s recent endeavors and found his last Next Men run to be incomprehensible. I fear it reads better as a collected work, but I’m not going to buy that collection at the moment. Byrne’s art had become too simplistic and his characters did not feel fully formed at times. Even the sex of the characters was not 100% clear on some of his work on Doom Patrol a few years back. Also the range and type of people who could draw seemed to be getting down to as few as the four people Howard Chaykin knows how to draw. All of that is out the window with Highways as the characters are all fully formed and the story of a space long distance hauler gets more and more interesting with each issue. I hope Highways is the first in a series of mini-series because this is John Byrne at his best with a good story and great art. I was shocked when I read that Byrne has never been Eisner nominated, not even for the Hall of Fame. I know Byrne has been a lighting rod for stuff he has said on his message board and other areas, but to deny his contributions to comics is absurd. Byrne was a fundamental force on the X-Men, which was at one time the foundation of all Marvel comics, did the second best Fantastic Four run ever and did one of the best re-boots of all time with his work on Superman. Think what you will of the man personally, but you cannot deny his skill and the amount of great work he has done in comics. 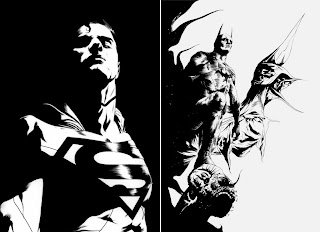 Greg Pak and Jae Lee on a Batman/Superman book coming out this spring. Hell yeah I’m getting this book. You had me at Jae Lee. First off kudos to DC seeing that they needed to start shaking up stuff and try and develop some writers who could be their stars. Greg has done plenty of Marvel work and some of it has been good and some not so good, but he can write. Jae Lee is a premier artist and his work on Before Watchmen Ozymandias was nothing short of amazing. Add into that the first arc is about how Batman and Superman first met in the current DCU and it sounds like a good plan. Maybe and I mean maybe, DC is starting to think outside the box and is looking to develop a line up of talent that people are interested in. Giving higher profile work to names that are not always in the spotlight is a good idea. Now if only they hold true to the rumored apology that editorial oversight will not come in the form of tons of last minute changes and DC could be righting that sinking ship. Of course Didio and Harras still have to go, unless they have learned from their mistakes. Can Didio at least stop writing (and I use the term loosely) comics. Sadly my gut feeling is that Didio is the problem and not the solution, as long as he is running the show true change will not occur. 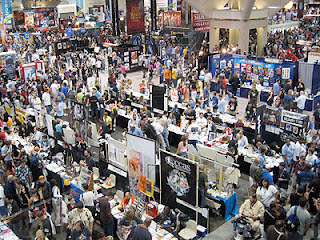 I read an article that Bendis rarely goes to comic book conventions. At this point I could give a damn about the conventions. 99% of the panels are creators avoiding answering questions because they can’t tell people the future plans or comics. Even worse are the answers that hint at stuff to come. I’m still waiting for that Adam Hughes Wonder Woman All Star book and more Frank Miller/Jim Lee Batman. So the panels are out. As for buying comics and books, forget it. I no longer have any interest in owning floppies except to read and then pass on or sell them. I like to occasionally buy an old series on the cheap on Ebay and read or re-read it, but then I either re-sell it or give it away. As for hardcover collections and trades, my wife will tell you I have more then enough and I normally get them as they come out. So the only reason for going to conventions is a chance to meet an artist and buy some of their art. At this point I now have a fair amount of art and you can find dealers or the artist themselves online to buy stuff. Still if an artist is on my list of people I want to own some of their art I may attend a con. At this point cons are a rare thing for me to want to attend.

Artist Scott Clark died last week at the age of 43 leaving a wife and son. That is tough and just plain sad news. He was a solid artist and that is damn young to die.

The headlines being pushed by DC “Vibe is newest DC Keystone Series”. (A) What the heck is a keystone series? Oh I know what they mean, but first time I have seen it marketed. (B) Vibe – really Vibe? Good luck with that. (C) I dropped Phantom Stranger because it was done poorly, if this book sucks I will drop it too. (D) Trying to force sales on a book is BS, tell a good story with good art and support it and we will come.

Free Comic Book Day is coming up soon. I know that for some retailers this it is just a massive expense (the books are not free for the retailers). I have heard anecdotal evidence that the people that show up on FCBD never haunt the stores again. If sales are now back  to great levels and the industry gets tons of buzz with all the movies I think it is time to end FCBD.

Please note the following paragraph was written before I had read the book and is somewhat redundant from Part 1. Still I think it covers some different points.

DC has put on a big publicity push around Batman Inc. #8. SPOILERS AHEAD.  I understand why the company feels a need to do this because the death of Robin, even more so Damian, who is Batman’s son, is a major event. As a parent myself I feel this will be devastating to Batman. It also immediately would wipe away the “change” that the Joker story supposedly implemented as family forgives past sins rapidly when a death is involved. In my view this is something that I think is a mistake. The addition of Damian to the Batman family was the brightest spot in the last 40 years of Batman. I wonder is this a case of Grant taking his toys and going home or is this the story he had in mind from the beginning. The suspicious part of my nature wonders if DC wanted to reduce the number of Robins to keep more in line with a younger Batman. I also wonder if this is a piece of Batman history that will disappear over time. In the years to come I wonder if references to Damian will just be edited out. When the new DCU was announced did Didio and company tell Grant Damian was going to be wiped out of continuity and Grant pitched this revision? Or is this Grant bringing his run full circle as it started with the introduction of Damian and may now end with the story of his death. Usually I could care when they kill a character, this one hurts and how they handle it going forward will be something I will watch. I guess I could avoid the spoilers but I surf while I’m doing my job and find it is almost impossible to avoid major spoilers like this.

Your Marvel Now program has generated some great comic book reading. Your shipping schedule of 15 to 18 issues of a series a year is interesting. Sadly even my budget has its limits and I have to drop Journey into Mystery, Uncanny X-Force and more titles soon. When push comes to shove you are essentially reducing the amount of books that I can realistically follow, so sadly marginal titles will have to bite the dust.
Sincerely,

Gail Simone is going to be writing Red Sonya for Dynamite comics, something I will check out. I have to say that Dynamite has arrayed an impressive list of names to be writing their books. The Image and Dynamite writers’ line up is better then DC and maybe even Marvel. Funny, years ago DC always had a great line up and writers and Marvel was usually stronger with artists.

More random thoughts down the road.