To round out the week we will close with my remarks on the alternative publishers’ offerings. Damn Joe Casey got in my head as I used to just call this category other. It is funny but a large portion of the alternative offerings are still either licensed deals or super hero in some form or another. Comic books tend to lend themselves to the more fantastic and allow one to produce stories with an unlimited budget (in that doing the stuff the artists draws on paper is cheaper then getting it on the screen). 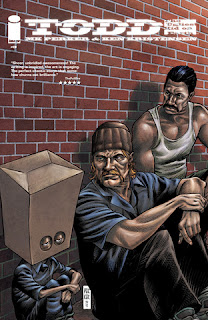 The best book of the week has to be Todd The Ugliest Kid on Earth #3 (of 4) by Ken Kristensen and MK Perker. Seriously I read pages to my wife and forced her to read a few pages as I was laughing so much as I was reading it. I probably impacted her relentless focus on her iphone. This is Mad Magazine at its best on steroids and a book that sees social taboos as things to leave in the rear view mirror. It starts with the police detective trying to ignore any evidence that Todd is not the killer and moves onto scary scenes of running out of toilet paper in a killer’s house. It has Todd’s parents in stalker mode and being easy mode. Todd learning the ropes in prison has to be the best scene of all. Last and far from least we are provided with a wonderful glossary to jail terms. This book is flat out my favorite book of the year and one of the funniest damn comic produced in ages.

Where is Jake Ellis #3 (of 5) is just a good damn comic. Nathan Edmondson is becoming known to me as the spy / covert operations type of writer and his work is very engaging. Tonci Zonic art is out of the Mike Mignola type of school but with a fluid feel to it. The adventure of Jon remaining on the run from some sort of government agency and his bizarre mind partnership with Jake Ellis has been a good one. This is the second mini-series in I don’t know how many, but I do know I want the 10 issue hardcover to read the story over in one sitting. It is a fun ride with plenty of twist and turns. It is one of the better books on the shelf. 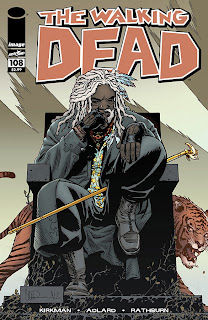 Highways #3 by John Byrne has been a real surprise. John’s work has been uneven over the last few years but this story is very entertaining. We have science fiction with some espionage type twists in it. In just three issues John has move the plot and characters forward at a great clip. More happens in three issues of this series then in a years worth of many of the big two’s books. 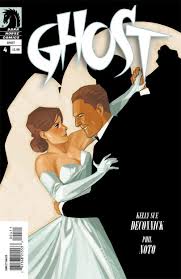 Next up is Ghost #4 by Kelly Sue Deconnick and Phil Noto. The payoff was we find out her origin. She was trapped in some sort of limbo and she is now back as has some sort of ghost like powers. The guy who trapped her was a demon and now they find out there are 32 demons who have escaped and they will track them down. Noto’s art does not always excite me but he knows how to tell a story. I’m not sure if I will follow the continuing series that is being launched from this book. I will try it out but the quest book is being done in Talon by DC also and I’m not sure how much I have vested in this book. Kelly also made the plot a little too elaborate and I got a little lost in who was who by the end of the mini-series. Still her work gets better and better and there is enough for me to give the ongoing a whirl when it hits the stands.

Mind the Gap #8 by Jim McCann and Rodin Esquejo is maddening. It was set up as a murder mystery and now the onion is getting peeled back and we are finding out there is a lot more to whole story. It appears the Elle’s mother may have been doing some sort of experiment to her daughter that has now manifested in her ability to enter other people’s bodies when they are close to death. I felt like the book read like a story that had a beginning middle and an end and now I feel like it is going to be stretched out into a long series. Not sure I’m signed up for a long haul, especially as we are eight issues in and there are no endpoints that have occurred. This book is cruising on the cancellation line.

Last up is Bloodshot #9 by Duane Swierczynski and Manuel Garcia. This is flat out a great action book and Bloodhshot himself is being made into a great character. He has gone from being the programmed warrior with a super healing factor (that makes some level of sense) to now a protector of super powered children. It is a relentless story and at the same time you feel for him as he is desperately trying to find his true identity.  Valiant has been absolutely brilliant in picking and choosing the talent for their books and letting them run with it. It is a wonderful re-imagining of the Valiant books. I recently started to re-read the original Harbinger series and while the core of the story is the same it is greatly changed. I loved the original Valiant books under Jim Shooter and these books under Warren Simons are just as good and updated for today’s audience. If I had to follow only one company out of Marvel, DC and Valiant, I would choose Valiant today.

A long week in review comes to a bittersweet end, come back and see me next week as I get lonely working from home.
Posted by Jim at Tuesday, March 19, 2013