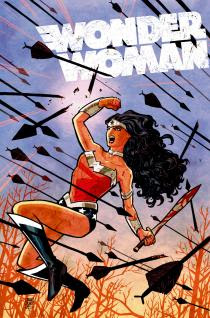 Thomm: A week (or so depending on when he gets around to posting this) ago Lee reviewed the first trade of Azzarello's Wonder Woman and was disappointed. Reading his review I wondered if he was on to something when he said it had deficiencies that might not be so noticeable reading single issues as he found them in the trade. Unlike Jim, I keep my singles, at least for a while, so I went back to the first six issues and read them again.

I'm not seeing what Lee sees as deficiencies. Here's the main thrust of what Lee said:

"There were some great ideas such as the various children of Zeus. But, Azzarello managed to make it all seem… pedestrian? WW is on a mission to save the latest woman whom Zeus loved from Hera. And, she has the personality of a stone. Seriously, she could have been a crown, or sword, or some mythical treasure for the amount of personality she had. Azz reduced her to a plot device. The same could be said of Strife WWs sister; nothing more than a plot device. There are several points when the voices sounded like they belonged to characters from 100 Bullets instead of a Wonder Woman book."
Lee: WHOA WHOA WHOA! What’s going on here? If ya wanna discuss let’s discuss.

*Ding ding ding* Tonight’s main event. The Master of Mayhem. The Leader of the Pack. The Luscious Leeeee.

And in the other corner. The annoying Thomm!!!!  And the crowd roars. Now then were were we? 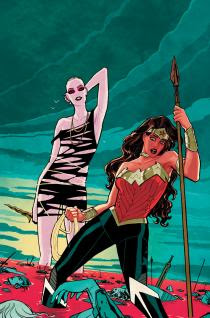 Thomm: Annoying only to Lee. Entirely correct to everyone else.  Just call me the Maryland Mauler.

I'm not seeing Diana as a plot device at all. The story jumps right in with her being an established person in the DCU. There's no back story set-up. Hermes sends Zola, the latest paramour of a now disappeared Zeus, into Diana's London apartment while Diana is asleep, saving Zola from a pair of centaurs Hera created to kill Zola. Diana immediately (after getting dressed) jumps into hero mode, returning to Zola's Virginia home to save Hermes from the centaurs, while also saving Zola who tagged along.

Lee: I agree completely. I should have been clear that I never believed Diana was a plot device. ZOLA was a plot device. She gets the story moving and that’s about all she does. She’s the ‘fair maiden in distress’ if you will and little else. I will say, at this point, Zola wasn’t annoying me. The first issue was set up and achieved its goal. I did like the first issue.


Thomm: Well, with that shift to Zola as the plot device, there’s less in dispute. At this point Zola is a plot device. She’s clearly impetuous and not particularly choosy about her sexual partners, but other than that we don’t know much about her.

In issues #2-4, the story goes on to a highly emotionally charged visit to Paradise Island, where Diana faced childhood bullying for her different origin and is now subject to disdain for bringing the male Hermes to the island.  Diana has an emotional reaction to her just revealed half-sister, Strife, exposing her actual parentage.


I don't see the lack of characterization in Strife, either. She's manipulative. In fact, that's the core of her power. She arrives at the island, and for no reason at all, deceives the warriors into fighting one another, resulting in several fatalities and a lot of injuries. She then reveals Zeus and Hippolyta as Diana's parents, knowing that Hera will then be aware and seek to exact revenge, which she does by turning Hippolyta to stone and all the warriors to snakes. Strife is full of malice, thinly veiled. 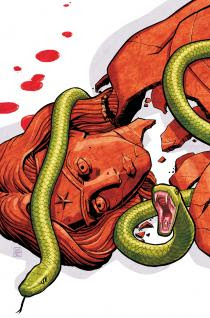 Lee: Let me point out, that in your description of issues #2-4 you don’t mention Zola. This is where I really started having trouble with her. She’s this ‘thing’ that Diana is supposed to be protecting. All this stuff is supposed to be happening because Zola is soooo important, yet she gets dropped for 3 issues. I think that’s bad story management. Not bad storytelling, but bad story (plot?) management.


Let’s look at the Strife character because I had trouble with her too. Let’s ask the basic question: Who is Strife? I ask it because she is supposed to be some sort of godling but I can’t really tell. I recognized Zeus (in name), Hera, Hermes, and Apollo. I don’t recognize Strife. Let’s call that a minor annoyance. So, the question becomes: what’s her motivation?


We have a scene in which she is talking with Hera but it isn’t clear if Hera sends her to Paradise Island or she just goes on her own. Her power is her power and some Amazons get killed. I’m fine with that. But, at the end of issue #2 she just announces that WW is the bastard child of Zeus. Again, why? There is no motivation of the character other than plot device.


Thomm: Well, you’re missing something in the reading of the dialog between Strife and Hera. Strife is clearly the daughter of Hera and Zeus. At this point, of all the children of Zeus that we see she’s the only one whose mother is Hera. I also think it’s clear that Hera doesn’t send her to Paradise Island. Hera has no idea that Diana is another of Zeus’s bastards until after Strife visits and proclaims it. As to Strife’s motivation, I’d have to say that her name sums it up neatly.

But back to Zola. She’s not dropped out altogether. She’s not important for a bit while we delve into what’s happened on Paradise Island after Diana left with Zola and Hermes, but then, neither is Hermes. They both show up in ongoing moments in the issues but aren’t the focus. In fact, it’s some of those moments that bring out more of Zola’s character. Regardless, though, I don’t have a lot of issue with Zola being a deus ex machine, particularly in Chapter 1 of a longer story. After all it’s not her book. It’s Diana’s book. 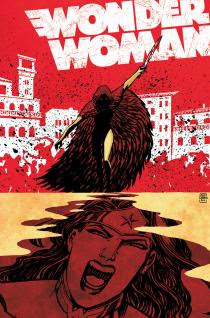 Lee: And here’s where reviewing trades is different from reviewing single issues. At this point, you and I are pretty much in agreement. Zola is a plot device but it is Diana’s book so I’m letting it ride. But, in another 2 issues, you’re going to see that Zola isn’t much better.

As for Strife, it depends on your level of acceptance. I re-read myself and it’s stated that she is the daughter of Hera-Zeus. The random decision to travel to Paradise Island still feels forced but it is keeping with her name. As a villain I wasn’t particularly impressed with her and as a lawful-evil ally she was kinda ho-hum too. For comparison, Deimos and Phobos, the Greek villains that Perez introduced in the last great WW reboot were far more interesting in a shorter time.

I guess it’s safe to say, through 4 issues we are still pretty much in agreement. But tomorrow, we discuss issues 5, 6, and more minor annoying points.