It is time to get into the Marvel books and my commentary on Marvel. My biggest gripe with Marvel at this point is the insane publishing schedule. Due to their aggressive publishing of issues of books week after week, at times, I have been compelled to drop some smaller titles. I guess it is a good thing as anything marginal is getting the ax a little quicker. 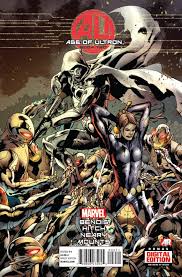 Age of Ultron #2 by Brian Bendis, Bryan Hitch and Paul Neary literally came out last week. What the hell is this all about? I know one thing Marvel has decided that the event books are great money and Avengers vs X-Men showed them to push it out the door ASAP. As a fan I’m happier to see the story faster, as a consumer it is annoying as the dollar outlay is fast and furious and I often barely have a chance to make an assessment of whether I’m all in or not (with add on books and such stuff). At this point I have to assume this is an alternative future story and like the DC Rotworld story everything will be re-set but we will get some sort of change that will be a revelation that will rival the invention of the wheel and sliced bread. Unlike Rotworld it is 10 issues and not 40 and it should be over in about 4 months as opposed to 18, so I can forgive it more then I can Rotworld. Finally the art is great as Hitch and Neary are the successors to the Adams/Giordano school of super hero art. One thing is odd is that this appears to be Peter Parker Spider-Man and not Potto Parker, but it is not important in an alternative future book.

Alpha #2 (of 5) by Joshua Fialkov and Nuno Plati is a fun filled piece of fluff. It has an indie feel to the book and I’m not fond of the character, but I’m a fan of Joshua Fialkov so I’m giving him a chance to win me over. So far it is a good story of a high school student who has super powers but has no clue how to be a hero. 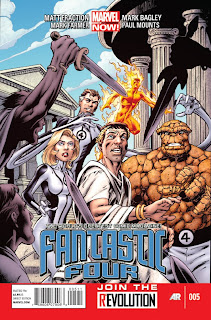 Fantastic Four #5 by Matt Fraction, Mark Bagley and Mark Farmer was a good issue. I’m glad to see the Reed and Sue are being open and honest about everything and Sue being pissed at Reed is not going to last forever. Matt did a good job of giving us an adventure that was one and done, advancing the plot line and adding another character into the mix. The Fantastic Four has not been this good since John Byrne’s run. Bagley’s artwork under Mark Farmer’s inks look great. Farmer is adding a lusciousness and roundness to Bagley’s line work that makes it look better then ever. This is a true job of an inker being a great artist in his own right. Farmer is making the art better without taking away from it being Mark Bagley.

The Thunderbolts #6 by Daniel Way and Steve Dillon is a book I have to kick to the curb very soon. I want to drop this book because it is taking forever to tell the story. What is keeping me on the book is Dillon’s art and the story is getting interesting. The down side is it has taken six issues to get there. The other issue I have is Frank Castle and Deadpool are acting way out of character. Okay at least Frank is, since Deadpool is insane you can do whatever you want with him. I have no clue whether I will get the next issue or not. 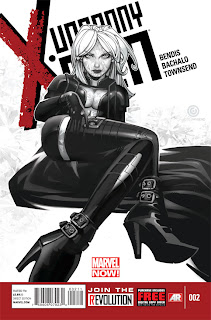 Uncanny X-Men #3 by Brian Bendis and Chris Bachalo was a great issue. The confrontation between these X-Men against the Avengers was well done. I thought was a nice touch that one of the new mutants Cyclops has gathered was able to stop the Avengers single handedly. This issue we find out the Magneto is not a traitor, but he is pretending to be a traitor to gather information on what Sheild is doing about Cyclops group. Once you go down the double agent route no one can trust you, which is a good place to put Magneto. We are not really getting into the crux of the purpose of the series but the ride is fun and the artwork is great. I find it is odd that it feels like a lot of comics have no clear idea of where they are going. With writers like Grant Morrison I get the sense he has an entire story in mind but is flexible to let the story continue of its own momentum once he puts fingers to keyboard. Not sure where Bendis is taking the X-Men, but All New and Uncanny are enjoyable books that come out almost daily, which helps with Bendis glacial pacing. I happiest that Marvel does not over sex their covers – laugh out loud.

Thor God of Thunder #6 by Jason Aaron, Butch Guice and Tom Palmer was a fail in my view. First off Butch Guice is a great artist and I own two pages from his work on the Sword of Atlantis stuff done a while ago. He was wrong for this story. Second the story itself of Gorr is was rather uninspired. I love the actual series right now and the three Thor approach has been brilliant, but Gorr is not that menacing of a character in a design sense. He is almost the Jar Jar Binks of Thor villains. His origin was rather bland. He has a horribly tough life, bitches out his gods and suddenly god like beings (conveniently dressed in Gold and Black)   drop into his lap. He manages to steal their power or something and flies off to kill gods. I’m sorry if that is the best you have for his origin, we would have been better left off with no origin at all. Why is this guy such a great warrior and able to kill all of the different gods. At the end we add in that he now has a son. It all felt totally inconsistent from what we saw before. Next issue we get back to Thor. Hopefully this issue will not impact how the overall story has been going.

Last from Marvel is the new Wolverine #1 by Paul Cornell, Alan Davis and Mark Farmer. I realized that Savage Wolverine is a rotating creative team and team-up book and immediately dropped that title in favor of this one. The art is of course great. Alan Davis and Mark Farmer’s work never fails to impress. Alan Davis is on my list of artists whose work I want to own. Since Wolverine’s core book seems to be Wolverine and the X-Men, which I don’t read, I believe this will just be episodic adventures of the character. The book featured his healing factor as he was able to recover from insane wounds and set up a mystery surrounding some sort of powerful alien weapon and something that is possessing people. A solid entertaining comic.

Next the final piece of the puzzle – Part 5 The Alternative Comics.
Posted by Jim at Tuesday, March 19, 2013