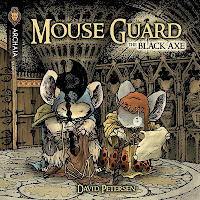 1. Mouse Guard: The Black Axe 6 - The conclusion of this latest Mouse Guard installment was as excellent as expected.  David Petersen has the rare ability to have months pass between issue and yet telling a sufficiently engaging stroy that I remember what was happening that last time an issue was out.  As to the story itself, I suppose its resolution isn't unexpeced.  The search for the Black Axe and the subsequent search for a worthy bearer of the axe resulted in the wielder I expected.  That doesn't matter.  The journey is so well told an expected result is far from disappointing.  Of course, Petersen's art and lettering are thoroughly evocative of the Middle Ages for our protagonist anthropomorphic mice so that it's easy to fall back into the story, too.

2. Todd: The Ugliest Kid on Earth 2 - Danny Trejo!  Like this book wasn't great enough, Trejo is the basis of Caesar, the inmate who Todd meets during his incarceration awaiting trial as a serial killer.  Naturally, Todd, now that he's infamous, has groupies who love him and want to have sex with him.  Nevermind that he's an elementary age kid.  A little homage to the Shawshank Redemption, too.  Now, I haven't done best quote in some time, what with the demise of Secret Six, but Todd's got some great ones, so here we are: "As the good book teaches - elimination of engrams from my thetan core made my breasts larger and my vagina smaller."  Ah, parody.  Love it.

3. Saga 10 - Marko and Alana's romance back story shows the power of reading, whether it's a good book or not.  Good to see Izabel back in our present storyline, too.  No surprise she's more than a little peeved at Marko's mom.  Apparently Alana's culture teaches about the finer points of infant umbilical cords just as much as our own culture, given her lack of knowledge about the matter.  Best of all, though, the planetary sized infant is called a Timesuck.  Vaughan has some great language in this book, creating a lot of new terms for his sci-fi denizens but grounding them in the vulgar of our own daily language.  Easily relatable, just like his characters and the wonderful art by Staples.  Sure hope Lying Cat is ok.

4. Fairest 12 - And now a run of myths and fables based books.  Rapunzel's story is weirder than I thought.  Her children are bezoars.  Nasty.  On the other hand, I love the guards at the Hidden Kingdom Fables tower in Tokyo.  They look straight out of a '70s kung fu movie.  Good back story on Tomoko and Katagiri splitting the Japanese Fables community after their exile due to the Empire's invasion.  And now it's a civil war.

5. Thor: God of Thunder 5 - End of the first arc shows just how old Gorr the God Butcher is, as well as why he's set on wiping out all the gods.  In some ways it's a metaphor for science undermining the existential need for humans to create gods, and undoubtedly it'll result in the inevitable conclusion that humans (and other sentient creatures) will always have a need to create gods to provide some semblance of comfort in the face of cold, hard science.  I'm not sure why this is considered an end of an arc because it's still the middle of the story, but I'll let Marvel call it whatever it wants, so long as the excellent story continues.

6. Wonder Woman 17 - Wow.  I guess I shouldn't be surprised that Azzarello doesn't just throw away a story.  The 0 issue that came out a bit back appeared to be a self contained story of Ares training young Diana, something that wouldn't be a part of our current story, but here it is, referenced right on the cover of this issue, Ares current very different physical appearance notwithstanding.  The Lennox/Orion interaction is turning out to be even better than the Diana/Orion interaction, too.  The real kickers, though, are Poseidon fighting the nameless one and Hermes clawing his way into the conversation between Diana and Ares.  As usual, can't wait 'til the next issue. 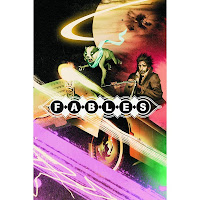 7. Fables 126 - Who knew the Blue Fairy was such a pedantic and finagler.  So much for the good natured version of Cinderella and other stories.  Not that such a thing is surprising in the Fables world.  Now, what I'm really looking forward to is Snow giving Holt his comeuppance.  If there's anyone deserving, he's it.  You're married because you unilaterally declared it so centuries ago?  This guy makes Saudi Arabia almost look like a matriarchal society.  Oh, and Stinky's still evangelizing for the church of Boy Blue, which gets us another great quote from some less than impressed weasels: "What overlords?  We're a representative litocracy.  Pass the reading test, no what age, and you can vote."  I'd love to know how this litocracy operates.

8. The Walking Dead 107 - And now we leave the lands of fable and myth, dropping instead into zombie and human horror.  Negan remains amusingly insane.  He uses words to provoke, then acts like it was simply a poor choice of phrasing once he's obtained a reaction, forgiving if he wants, punishing if it serves his purpose.  He's insane but he's not stupid.  Of course, I don't think he's so smart as to have caught on to Rick's plan to eliminate him.  Limiting those in the know certainly helps.  And now we get to find an Ezekiel to go with our Jesus.  Seems Kirkman is on a biblical streak.

9. The Unwritten 46 - More zombies.  Ok, these ones are created by stories told by a boy and not some mysterious plague, but zombies all the same.  The demise of Leviathan is certainly causing unexpected side effects for Tom and Richie, not to mention the rest of the world.  It's a bit odd having two consecutive issues without Tom, though.  Richie's gig as lead here is a good one, though.  Doesn't hurt that we still have Didge, who's quickly become one of my favorite characters in the book.  Even better, Madame Rausch is returning, all fresh and revitalized.  Hope Ritchie knows what he's doing with her.

10. Before Watchmen: The Comedian 5 - I wonder about this series to some extent.  I mean, Blake was a bastard before he was in Vietnam.  He had already sexually assaulted the original Silk Spectre and then had an affair with her, shagging her even in the midst of her wedding day, but this series is attempting to make Blake a knowing bastard, one who gets an even more skewed view of life, turning it into service of the USA, somehow.  The thing is, in reading the original series I always felt that it was Blake's discovery of Veidt's plan that was the turning point.  On top of that, Dr Manhattan put a quick end to the Vietnam War.  Not that Azzarello isn't telling a good story.  He is.  I just haven't been able to figure how it fits in the Watchmen canon.

11. Batwoman 17 - More Wonder Woman appearance, and more myth and monsters.  A good turn at the end, so far as Ceto's motivations in the attack on Gotham go.  Wonder how Batwoman coming out to her girlfriend is going to go.

12. The Black Beetle 2 - Still good noir work.  Good resolution of last issue's cliff hanger, too.  I'll definitely keep this issue away from my wife, though.  She doesn't like little critters, so the rats all over our hero would definitely creep her out.

13. Thief of Thieves 12 - Man, Augie's an idiot.  No wonder he sucks at being a thief.  Interesting that there's a lot more to his girlfriend than being a hostage.  Good thing the rescue turned out to be unnecessary, but how will they get out of being surrounded by police?  Fun.

14. The Shadow: Year One 1 - The reason to get this is obvious - Matt Wagner.  I'd like it even more if he was doing the art, but Wilfredo Torres does a good job of his own.  Unlike the Green Hornet: Year One,  when Wagner took a two track approach of looking at his protagonist's past and telling a "current" story in the Depression years, this one is set entirely in 1929, with no back story other than Lamont Cranston returning to the US from Cambodia, where he's already The Shadow.  It's off to a good noir start.

15. Dark Horse Presents 21 - An excellent and varied selection of stories once again.  Alabaster is particularly good, and the special one off by Neil Gaiman and Paul Chadwick was excellent.

16. The Massive 9 - Completing the "Subcontinental" arc, there's a lot of conflicting motivations afoot on The Kapital.  This book is starting to be a good deal more interesting now that's it's left its groundwork of the big ecological disaster behind.  The next arc should be even more interesting.

17. Joe Kubert Presents 5 - The penultimate in this last endeavor by Joe Kubert before his death.  I particularly enjoy reading his notes that he left behind about how he came to write the Sgt Rock story he drew with Paul Levitz writing.  The panels from a story that presented one of the two known death scenes for Sgt Rock was nice to see, too, as I hadn't read the story.  His notes on The Biker were particularly enlightening, too, as the character takes some inspiration from his own oldest son who lost a leg in a motorcycle accident.

18. The Walking Dead: The Governor Special - I bought the hook on this because there were a few new pages that featured the Governor at the point at which he became leader of Woodbury.  That and it happened to be a slow week for new books for me.  Very creepy story.  The majority of the book is just pages that were originally in The Walking Dead already.

19. Saucer Country 12 - This one is over in two more issues, which is the only reason I'm still on it.  I'll finish it out, then read it en masse to see if it's something worth retaining.  As with most of the previous issues this one is long on tell rather than show.

20. Mara 2 - I know, Wood has had a slow start in The Massive so I shouldn't expect anything different in this book but unless something interesting happens soon I don't know how much more time I'll give this one.

21 Animal Man 17, Swamp Thing 17 - As expected these two end together in the attack on Anton Arcane and his fortress, and as expected they're both following Arcane back in time, which will no doubt lead to none of the Rotworld story ever actually having occurred.  I'll re-read when it's all done, but in the end this strikes me as a wast of the talents of Lemire and Snyder.
Posted by Thomm at Wednesday, March 06, 2013