Image Previews for May

Lee: Image is getting more and more interesting every month. They have such a good blend of new material and trades that it’s hard to know what to get. The best part is that most of the material is really, really good.
Thomm: I think Image has the best selection, on a month to month basis, of any of the publishers right now. With Vertigo putting out less, Image is rising all the more in my interest, with Dark Horse a close second. 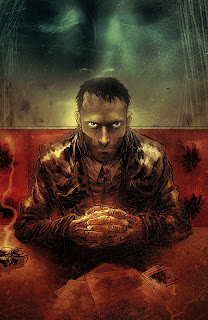 TEN GRAND 1
story J. Michael Straczynski
art / cover Ben Templesmith
32 Pages / FC / $2.99
Joe Fitzgerald was a mob enforcer until the day he met Laura, who convinced him to leave that world behind. Before quitting, Joe agreed to one last job, little realizing that the man he'd been sent to kill was deeply involved in demonlogy. He survived Joe's attempt and came after him, fatally wounding Joe and killing Laura. As he lay dying, an angelic force (who may or may not be what she appears) pointed out that where she is going, he can't follow, and where he is going, he wouldn't want her to follow. But if he will agree to work for them as a different kind of enforcer, they will bring him to life and keep on bringing him to life every time he is killed in a righteous cause. The reward: for those five minutes of death, he will be with Laura again. Would you endure an eternity of pain and death, dying over and over, to be with the woman you love for just five minutes each time you died? Most people might say no. But Joe Fitzgerald isn't most people.
Lee: Straczynski was kinda hit/miss for me until his Before Watchman series. It seems that he’s gotten some of his mojo back and I, for one, am happy to read it again. This certainly sounds interesting and with Templesmith on art I am sure it will look great. This is by far, the easiest pick of the month.
Thomm: I’m not so sure it’s the best pick of the month for Image, but it does look promising. My concerns with JMS over the years have been less about the quality of his work and more about his seeing it through to the end. 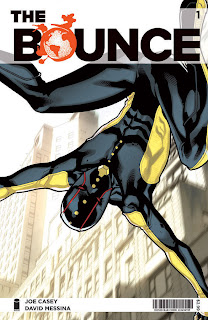 THE BOUNCE 1
written by Joe Casey
art and cover by David Messina
32 Pages / FC / $2.99
Meet the ultimate slacker superhero for the 21st Century! Jasper Jenkins is a super-head AND a super-hero! He's relatable AND reliable and he's embarking on the adventure of a lifetime! The sensational debut of the new feel-good hero of the decade! You can't afford to miss it!
Lee: This write up is terrible! The hero(?) makes me think of Speedball but I can’t believe Casey would write that. Casey’s ideas are too big and, actually, whacked out for something so straightforward. I like most of Casey’s stuff so my interest is piqued but I wish I had a better idea of what the series was actually about.
Thomm: Having read the first issue of Casey’s Sex, I find this to be the more interesting book than Ten Grand. I’m looking forward to seeing how Casey overcomes the inherent adversity between the inactivity of a super-head and the hyper-activity of a super-hero, embodied in one person. 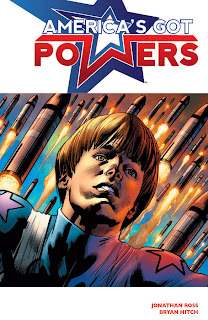 AMERICA’S GOT POWERS 7 (of 7)
story Jonathan Ross
art / cover Bryan Hitch
32 Pages / FC / $2.99
Too many Americans with too many powers...so the government decides it's time to wipe them all out and start from scratch. Nobody ever said it would be easy.
Lee: It’s only taken a year to get 7 issues out. Did anyone make it to the end? Is it any wonder why I trade wait?
Thomm: Yeah, this is definitely trade material. I see Ross is employing what a friend and I called the Mexico Plan when we were in college 20 plus years ago. Kill ‘em all and start over. I suppose it’s really the Noah Plan. 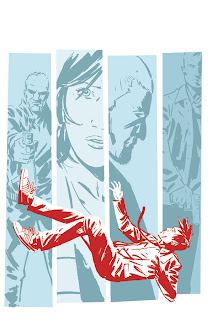 COMEBACK TP
story Ed Brisson
art / cover Michael Walsh
136 Pages/ FC/ $14.99
Reconnect agents Mark and Seth go back in time to save people from their untimely demise – for a fee. But, when a rescue mission goes awry, both agents find themselves trapped in the past and on the run from both the FBI, who want to jail them, and their own employers who want to kill them to protect their own dark and deadly secrets. Collects COMEBACK 1-5, plus never-seen-before extras.
Lee: Then again the problem with trade waiting is you don’t remember all the series. Take this one for instance. I do not remember this at all. It sounds great and for $3/issue it’s not all that bad a deal.
Thomm: It’s a bit like buying just one chapter of a book, though. At only 5 issues you’re not getting far into the story, I’ll bet.
Lee: So I just looked this up because I can't believe I missed it and found out this was the story with the illegal time travel operation.  That's what we liked about this, "illegal time travel'.  That's a hook.  This writeup doesn't do the series concept justice. 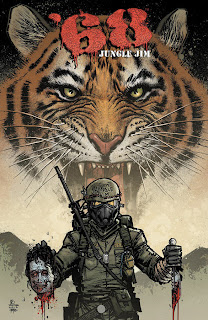 ’68 JUNGLE JIM 2 (OF 4)
story Mark Kidwell
art / cover Jeff Zornow & Jay Fotos
32 Pages / FC / $3.99
The skies over Vietnam rain liquid fire as Brian Curliss, AKA Jungle Jim continues his epic quest to find the rotting, undead remains of Sergeant Jim Asher. Jim’s search carries him across the border into war-torn Cambodia, where the struggling occupants of an isolated French mission hold their own against hunger, madness and the ravenous dead.
In the dripping shadows of the rainforest, human life hangs on a hair trigger and to save himself and those who need him, Jim will have to face more than the living dead and swarms of vengeful Viet Cong… because here there be tigers.
Lee: IT’S JUNGLE JIM! We know him! He writes for us allllll the time. And check out that cover, wasn’t Jim saying something about heads on pikes just yesterday (several days ago by the time this actually sees print). I think Jim should get this and tell us how it is.
Thomm: Considering our Jungle Jim buys just about everything published I’m guessing he’s already ordered this series. With his affinity for heads on pikes this would rank up there with a monkey on the cover. Being set in the jungle, maybe he’ll get that in a future issue. 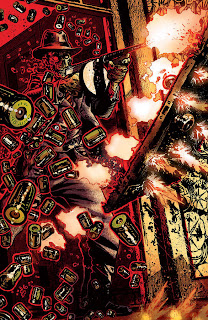 IN MUSIC 2
story Steve Niles
art / cover Tony Harris
22 Pages / C / $2.99
Al Capone is dead. Shot through the skull by Shaw’s cursed slug, the gangland legend lies dead before Eliot Ness could drag him to court on tax evasion. Shaw’s interference has uprooted history and now Ness wants it set straight. The shot also alerted Shaw’s enemies of his presence in Capone era Chicago, and they are coming for him. They took his skin last time. This time they'll have his eternal soul.
Lee: Zombies and gangsters, I guess it’s a new idea. Unfortunately I’ve been less and less thrilled with Niles output over the last year or so. Not that it’s bad, but not that it’s good either. It’s just not held my interest.
Thomm: Yeah, I tried out a Niles title a couple years ago and was underwhelmed. Besides, why would Ness be upset that Capone is dead? It’s not like he knows how history was supposed to go. As far as Ness would be concerned, a dead Capone is a good Capone. 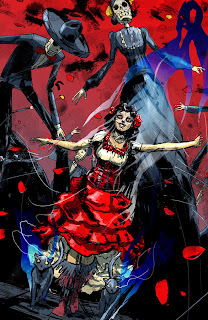 DIA DE LOS MUERTOS 3story Alexander Grecian, Kurtis Wiebe and Joe Keatinge
art / cover Riley Rossmo
40 Pages / FC / Golden-Age Format / $4.99
Inspired by the Mexican Day of the Dead, artist extraordinaire, Riley Rossmo, interprets stories from three of today's top writers. From Kurtis Wiebe (Peter Panzerfaust) comes a heartbreaking love story--in this world or the next. Joe Keatinge (Glory, Hell Yeah) offers up Day of the Dead 3000. As Ultra Muertos falls at the hands of Mother Slaughter, his grandson takes over the mantle with a death wish for all-out apocalypse! And New York Times bestselling author Alexander Grecian (Proof) tells a tale of ghost children.
Lee: Jim sent the first issue to me and I am glad he did because I wasn’t getting it otherwise. Basically this is an anthology around the Mexican Day of the Dead. Rossmo’s art is the real draw here, but it looks like the writers are getting better as the issues progress. If you like Rossmo’s art then you will most likely enjoy this.
Thomm: I liked Rossmo’s work on Proof, and I have some fondness for anthologies. I may have to take a look at this when I hit the store today (writing on a Wednesday). 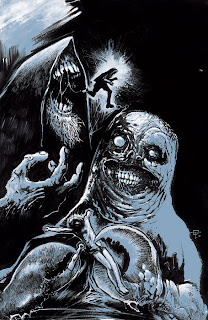 MINIATURE JESUS 2 (of 5)
story / art / cover Ted McKeever
24 Pages / BW / Golden-Age Format / $3.99
Critically acclaimed writer/artist Ted McKeever returns to the theater of the bizarre, as a small-town Pastor thinks the eight-inch Jesus that descended from a cross on the church's wall is the devil's work. Meanwhile, a recovering alcoholic's fractured reality battling his own demons is becoming all too literal.
Lee: When the phrase “theater of the bizarre” is combined with McKeever then you know it’s gonna be out there. McKeever’s last book, Mondo Bizarro, was a visual masterpiece but the story was bizarre. McKeever visited similar topics to this in his Metropol series which was excellent. I am sure this will be good.
Thomm: This raises an interesting question for me. When something out of the ordinary occurs a lot of people decide it’s either a work of god or a work of some demon. Who decides? In an omnipotent, omniscient theology is there a difference?

Thomm: I went into this figuring on The Bounce as my first choice, but now I’m looking at Dia de los Muertos and Miniature Jesus, too. Ten Grand might be more of a wait for the trade like Lee.
Lee:  I'm all over the map this month.  So much of this looks good I'm not sure which one I like the best.