Volume 2 of the LDB trades keeps the book on the firm track that volume one established. 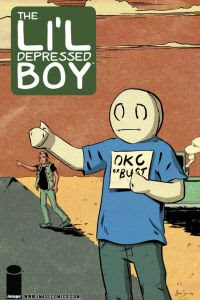 LDB is, of course, depressed.  Unlike the first volume where we have no idea why he's a depressed person this time we know it's because of his love affair with Jazz that was aborted before it even started in the first volume.  Naturally, LDB's method of coping is to not leave his house, play video games, read comics, eat, and sleep.  Ignoring Jazz's calls is also high on the list.

Drew, LDB's one and only friend, takes him on a road trip from Amarillo to OKC to see a band called Andrew Jackson Jihad, an actual band that's been around since at least 2007, based on its web site.  Drew's truck is a used beast of questionable reliability.  Naturally, the trip is fraught with pedestrian perils, ranging from a poorly performing pair of windshield wipers to an outstanding warrant for Drew.  Fortunately, Drew's freakshow performance abilities get him an ROR.

When all appears lost in their hopes of making the show Drew comes through, incompletely, but, in the end, enough that LDB enjoys himself, even with beer spilled on him by another patron.  Of course, on the trip back to Amarillo he learns that his credit card has been cancelled and has to bum breakfast off of Drew, so he's back to his sad sack, but still feels better than before they left.  Even having to steer the truck while Drew pushes, after it breaks down on the outskirts of Amarillo, doesn't leave him in the doldrums.

In a nice finish, Jazz is waiting on LDB's stoop.  They take some tentative steps toward recovering their relationship.  Granted, they don't actually talk about their relationship, but at least LDB is now willing to spend time with her again.  He doesn't even mind that she broke this door because she needed to use the bathroom while waiting for him.  For security for the night LDB moves his couch in front of the door and sleeps on the couch.  Dead weight security.  Even a depressed boy can manage dead weight.
Posted by Thomm at Wednesday, March 27, 2013