I’m going to try and make this a very short and brief post, so more of just some one liners and thoughts on the books I managed to read by Sunday evening. 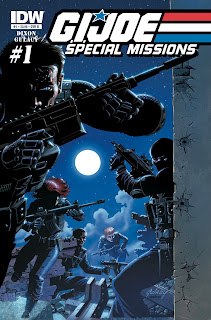 GI Joe Special Missions #1 – Already love this book as Chuck Dixon is a great writer of action adventure and I love Paul Gulacy’s art. I own two pages by the man. Not a GI Joe fan at all but the first issue was entertaining and set up the first arc very well.
Buy It

Action Comics #18 the last of the Grant Morrison run on Action Comics. I will buy the collected edition when it comes out, but as a monthly book it lost me. I also wish Rags could have drawn the entire series by himself. Grant got into the metatextual side of things with this book and it will be a better read collected. This is also my last issue of Action since the next creative team has already been wrecked.
Wait for the trade. 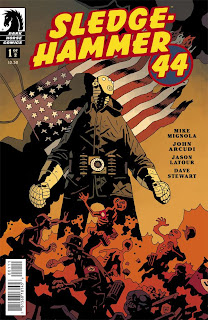 Sledgehammer 44 #1 was a fun book about a “super hero” that was created in WWII and this is apparently his first mission. It was developed for John Severin who died before having a chance to draw it. It was a fun story and a little sad that John did not get to draw it. John was one of the true great artists in the field. (I know it was last week, but I got it late.)
Buy it.

Justice League of America #2 has Catwoman walking around showing off her tits like a $20 hooker and the new GL already out of the book for whatever reasons. Also the worse tactical plan ever as Steve Trevor leads the troops into the woods. Finch’s art saves the book from being pure trash.
Don’t buy it. 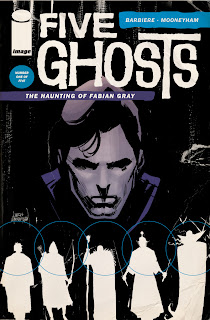 Five Ghosts #1 (of 5) is a new mini-series from Image. I loved the pace and flow of the story. From page one to the end it never slowed down. It set the premise well, threw in a few mysteries and took off. I could nitpick the book as it is not perfect.It suffers from not having an editor, but damn it was fun. The premise is an Indiana Jones type is possessed by five ghosts. They are a wizard, archer, detective, samurai and a vampire. He can access them at anytime and there are some problems with the whole being possessed thing.
Buy it.

Justice League #18 they go on a recruiting drive. This book keeps trying to be a good team book and does not make the cut. Jesus Saiz’s art saves the book.
Don’t buy it.

Superior Spider-Man #6 was almost a fluff issue until we got till the end and then Potto crossed a line. It was also confirmed he killed Massacre, but that is understandable given that Massacre was almost pure evil. I’ll give Marvel credit I’m on this series, it has plenty of goofy things that are just insane, but I want to get the next issue.
Buy it. 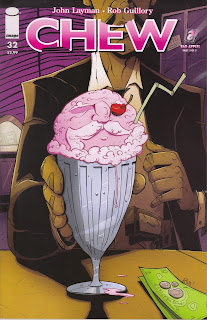 Chew #32 was again a great issue. I love this series and have picked up the hard cover collections. Not sure the book has any sort of entry point but it is worth getting the trades and catching up. A quick side note, Layman’s other books Mars Attacks and Detective are also great. Although I feel bad for him on Detective because I can almost see him fighting the cross-over issues and other mandates as he struggles to build up a new bad guy with the Emperor Penguin.
Buy it.

All New X-Men #9 is another good Marvel book. Again I will give Marvel credit publishing 9 issues in about 32 days is a great way to overcome the glacial pacing of Brian Bendis.
Buy it.

Legion of Super Heroes #18 and now I off this book again. Giffen’s involvement in this issue was minimal and it already hurt the book. The last issue was better by far. I hate leaving LOSH and Nightwing are hard for me to drop since I love the characters.
Avoid it.

Nova #2 was fun. The big problem I have is the kid was established to be 17 and they are drawing him like 12 to 14 at best. Ultimate Spider-Man is too young and this guy looks to be too young. Not sure how long I can hang on this series.
Read it on the stands. 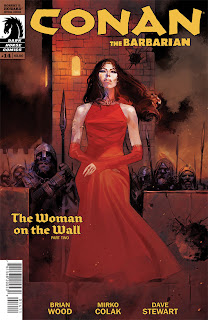 Conan #14 was a damn fine issue. The emotion between Conan and Belit is palatable. The action is pure hard core barbarian sword fighting at its bloodiest best. Wood is doing perhaps the best Conan comic book ever done. If only Barry Windsor Smith was drawing it.
Buy it.

Hulk #5 was only okay. Waid is doing a good job with the character. I was just not thrilled with Attuma as the main bad guy.
Skip this issue.

Invincible #101 was a very good issue. The new reality for Mark and Omni-Man were front and center in this book. I also see some tough times ahead for Mark and Atom Eve as she is pregnant. This is one of the best continuing series on the stands.
Buy it.

The best book of the week was Saga #11. From the first page showing Marko and Alana in the middle of sex till the last page showing Marko’s father dying the book is engaging, intelligent, funny, fanciful and a true gem. The relationships feel honest and real on a printed page. It is a fun space adventure and just flat out a great series.

Wow, I manage to actually keep it pretty damn short and sweet. Till next week.