Lee: Things have been more than a little crazy around here. I’ve been traveling to Hollywood… Hollywood, Alabama that is… a lot which is killing me. I should be back on track for this month… hopefully.
Thomm: Hollywood, MD; Hollywood, FL; and now Hollywood, AL? May as well go to Philadelphia, MS while you’re at it. 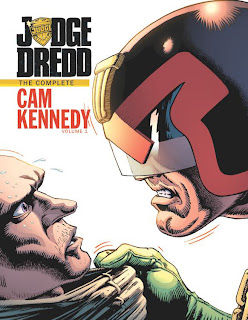 Judge Dredd: The Cam Kennedy Collection, Vol. 1
John Wagner (w) • Cam Kennedy (a / c)
Return to the legendary tales from Mega-City One in this first collection of tales illustrated by Cam Kennedy! Reprinted in classic black and white and featuring a wealth of complete stories, this collection features stories such as "The Suspect," "The Falucci Tape," "Something Abnormal About Norman," and more. HC • B&W • $49.99 • 248 pages • 9.25” x 12”
Lee: I love the fact this is advertised as “complete stories.” It would have been nice if they had done that with some of the other Judge Dredd collections. I love this material but I feel like I’ve been burnt by these artist’s collections. I’ll let someone else get it and tell me if it’s complete.
Thomm: Eh, Judge Dredd. I’ll pass.
Lee:  You really need to get over your Judge Dredd negativity!  It's good stuff. 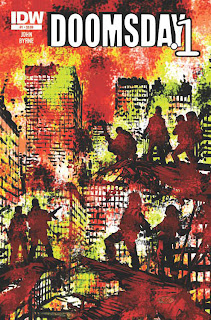 Doomsday.1 #1 (of 4)
John Byrne (w / a / c)
The Earth may have dodged a bullet on 12/21/2012, but there are worse things in store for our little blue planet. Seven adventurers aboard the International Space Station watch in horror as most of the world is decimated by a monster solar flare. And their only choice is to return to the surface, and face whatever awaits them there! FC • 32 pages • $3.99
Lee: This looks to be a rehash of Byrne’s Doomsday +1 book. Just in case you didn’t know, Doomsday +1, published by Charlton in ’75, was some of Byrne’s earliest work. I’m betting that a return to some of his ‘classic’ material will bring out the best in Byrne and make this very entertaining.
Thomm: I’m sure it’ll be more entertaining than the promo, at least. Decimate means to kill 1/10 of a group. Is that what is meant here or a lot more destruction than that, considering we’re talking most of the world? And solar flares? They hit the Earth all the time. What makes this one special? Man, this is making me as cantankerous as Jim. 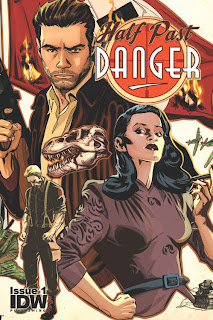 Half Past Danger #1 (of 6)
Stephen Mooney (w / a / c)
DAMES. DINOSAURS. DANGER. Summer, 1943, and in the midst of a war waged by monsters, Staff Sergeant Tommy ‘Irish’ Flynn never expected to encounter a real one. But on a remote island in the South Pacific, Flynn and his squad come face-to-fanged-face with creatures long thought dead. FC • 32 pages • $3.99 Visit the official site here.
Lee: This definitely has it all. It has dames! It has dinosaurs! It has danger! It’s Indiana Jones meets Jurassic Park! I’m sold. This looks great.
Thomm: I agree. I thought this was one of the best for IDW for the month when I first saw it. Should be a lot of fun. 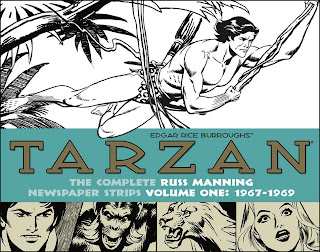 Tarzan: The Complete Russ Manning Newspaper Strips, Vol. 1: 1967 - 1970
Russ Manning (w / a / c)
Beginning a new 4-book series collecting the entire run of the Tarzan newspaper strip by Russ Manning. In 1967 Manning was selected by the Edgar Rice Burroughs estate to take over the strip and bring it back to the original Burroughs vision. With assists by Bill Stout, Mike Royer, and Dave Stevens, Manning created 26 original Sunday storylines and 7 daily stories. The action took place from Pal-ul-don to Opar and Pellucidar and beyond. The first volume includes more than 750 sequential daily strips from December 1967 through May 1970, reproduced from the Edgar Rice Burroughs file copies.HC • B&W • $49.99 • 288 pages
Lee: Ohhhhhh, pretty art. Did you see the list of inkers? Bill Stout! Dave Stevens! It’s going to read like a daily but it’s gonna be beautiful to look at. I need to decide if I care that much about Tarzan these days.
Thomm: It’s gotta be a lot better than the current dailies. Tarzan was the second book series I got into as a kid, so I make occasional returns to it for nostalgia’s sake, but the current dailies are terrible. 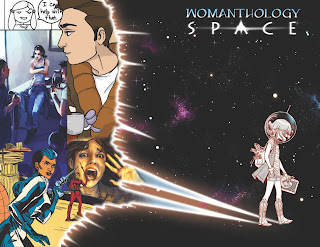 Lee: IDW is a little mixed this month but overall it looks good. I even managed to avoid talking about the latest Artist’s Edition book. But that was only because even I couldn’t afford it.
Thomm: As usual, a large portion of IDW’s offerings are licensed fare like Transformers, so there’s only but so much original work to examine. Nothing hugely exciting here, but some dino fighting is promising.
Posted by Lee at Wednesday, March 13, 2013