The headline from Bleeding Cool is: “Apple Bans Sex, Image Tells You Where You Can Find It”. Now I enjoy their play on words, but I have to wonder why is it that blood and guts to the nth degree causes nary a stir, but to show actual sex is still considered just too much. The Puritanical streak that runs through culture is so odd that we are a rather open society in some ways and are willing to accept all sorts of things. We are moving towards a nationwide legal acceptance of gay marriage which seems to be a society no longer moored to old taboos. We have comics and movies that have destruction on a massive scale and espouse the idea we are a country of free speech, but we draw the line at some strange places.

So apparently Vibe and Katana did not do well with their opening issues and that could spell the death of both of their books. I have to laugh that after one month and the handwriting is on the wall. It is sad, but often true. Especially with DC, as they pull the plug fast lately. It shows also that Geoff Johns is not an automatic draw anymore and no matter how much the company wants to shove a character down our throats – we will resist. Vibe can’t be made cool over night. 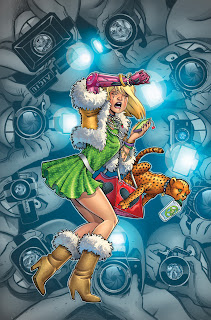 THE GREEN TEAM: TEEN TRILLIONNAIRES #2
Written by Art Baltazar and Franco, art by Ig Guara, cover by Amanda Conner.
It's not easy being Cecilia Sunbeam, the most famous actress in ...and it's harder still when you suddenly find yourself with a cybernetic arm! The all-out assault on the Green Team by class-warrior Riot has some very unexpected consequences, and no one's going to emerge unscathed!
THE MOVEMENT #2
Written by Gail Simone, art by Freddie Williams II, cover by Amanda Conner.
The unrest in heats up as citizens clash with the police. Which side stands to gain when super powered protestors enter the fray?
I’m sorry I can’t even invest in buying the first issues of either of these books. I don’t care about the politics, if any.  I just can’t in good conscious even care about these books. The Green Team looks and sounds like the worse type of crap that I avoid on TV with the Kardashians and the rest of that crap. I sure as hell do not need to waste $3 to even read the first issues. The second book just sounds very lame and I have never been a huge Freddie Williams fan. This looks like books that internally they all thought would be neat and cool or different with an independent edge to them. Instead it looks to be crap. If I’m wrong some one let me know as I will never know.  I know I’m prejudging based on covers and the solicitations. WHICH IS HOW I’M SUPPOSE TO JUDGE A BOOK ON SINCE THAT IS HOW DC IS SELLING IT. I screamed that since some creators whine bloggers that trash a book without giving it a chance. My wallet can’t try everything.

The bru-ha-ha caused by Jerry Ordway is all over the place. When I read it I felt Jerry’s pain a little. He was bemoaning the fates that he signed an exclusive and had not worried about asking about guaranteed work. Not sure what the exclusive deal did for him then, but it is common mistake that when dealing with a corporation you forget they have lawyers drawing up this stuff. People trust the person they are dealing with and mistake the person for the company. I tell people all the time a corporation is a soulless entity and will do what ever it needs to do that best serves its goal which is to make money.  There are people in those companies who will treat people fairly, but you can’t depend on that. Jerry was lamenting the changing of the guard that goes on in every walk of life. I like to joke that I have reached the age where I now look at a pretty young woman and think she is attractive and the look I get back is who is the old man over there. I have gone from the hotshot rising star at Citicorp to the most senior person at my current job and from young man to grandfather. Jerry’s remarks were just an honest assessment of where things are and that he will not have to adjust and figure out how to take that next step. Jerry’s work is outstanding and I think his style still works for many types of stories. I bet if need be he could survive as an inker and you can tell a lot of these artists could use one. I wish Jerry well and if he does a Kickstarter I will be there. I’d be happy to buy a page of art from him as he is on my list (incomplete) of 40 artists whose work I would like to own.

Dark Horse is offering this for June. 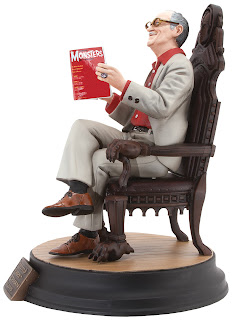 FORREST J "FORRY" ACKERMAN STATUE
On sale Sept 25
13" tall statue
$179.99
Forrest J Ackerman, commonly known to fans as "Forry", comes to life in this colorful 13" tall statue. Forry was the creator, editor and principal writer for Famous Monsters of Filmland, a magazine that influenced generations while spreading the love of the horror genre he was also known for his "Ackermansion," a sprawling house in that held his extensive horror book and memorabilia collection. For fifty years, Forry shared his collection with fans during open-house events. As an agent, writer, editor, and actor, he had far-reaching influence in the science fiction, horror, and fantasy community. The statue includes a nameplate on the base with one of Forry's most popular nicknames, "Dr. Acula."

So talk about limited audience. Who the heck wanted this collectible? How many people in still care about Famous Monster of Filmland and what percentage of that audience wants a statue of the man behind the magazine? Can you imagine having this in your house and even begin to explain to anyone who asks what the hell you are doing with a statue of some guy reading a magazine. Can you imagine the wives asking their husbands why the hell they are complaining about taking her out to dinner because it costs too much and yet he spends $200 bucks on this? Who green lights this stuff? I bet the production run is at best 100.

Bleeding Cool rumor is that DC may publish up to 4 weekly books, one for each of there core titles, Batman, Justice League, Superman and Green Lantern. This would replace 16 of there lower selling titles. Even if not true, it means this thought is circulating with some editor or management person at DC. It just goes to show how weak DC has become. Their marketing gimmicks are now the major thrust of the company. All new number ones, all zero issues, two Batman events, one Superman event, 52 covers for the new JLA. The problem is that the core is missing. Johns no longer has any real oomph in his work, Snyder and Lemire are the only people getting any buzz and new titles like Green Team and The Movement is the height of their innovative thinking. DC needs to go to Darwyn Cooke, Brian Wood, Greg Rucka, Ed Brubaker and others to add to the recent wave of giving over the GL books to newer talent. Tell them here is a boatload of money pitch us three series and we will run with two of them. Then hire good to top flight artists and stop worrying about being Mussolini and have the trains on time and start worrying about making great comics with great stories. The transition will hurt but long term you will build a better company. If you have great creators writing your core books with great artists the sales will take care of themselves. Trying to force people to buy your books is not working.  Heck the only Superman books I’m going to get are Superman Unchained and Superman/Batman and they have yet to be released. Even Justin Jordan on Superboy is of no interest to me because the character is such a poor iteration. Outside of Talon (which is on my watch list to be cancelled) I get no Bat books without Batman in them as the characters have been so ridiculous changed. Heck Nightwing is essentially being re-booted again with the whole relocation to . DC is a wasteland for the most part and this idea, regardless of whether is was it comes true or not smacks of desperation.

I have another quick complaint about DC, no letters pages. Your lame ass Channel 52 sucks and with the advent of the internet the news you want to share on the last page better be something new, but it is stuff like – we are going to a convention.  Build a core audience for each title and be more fan friendly.