I’m so glad it’s Friday (as I write this)!  It was a long week at work, but a productive one.  It’s also been extra busy around the house with family in-town and more arriving tomorrow (today as you read this).  This means some cleaning around the house after my afternoon (hopefully two hour) nap – I can feel it coming on Even Now…when I have come so far….  Whoops, we have a habit around here of breaking into song whenever a certain phrase comes to mind – maybe it’s a memory implant trigger.  Speaking of memory implants, my enjoyment of Hawkeye has been marred since the disappointing Secret Avengers issue.  All I can think about it is him having more of a “Swiss-cheesed” memory than Sam Beckett. The issue was good, but the problem (SPOILER ALERT) of Clint reading his gangster love-toy’s comics was so dumb.  I liked the comic covers, but why couldn’t “Cherry” have written down the issue numbers for the lock combination in order on…you know… a piece of PAPER!  Honestly, I think Clint would have more sex in a monogamous marriage -- why put up with this damage!  Kate Bishop is my favorite character in the book and there was way too little of her this time around (Sorry Rusty [I know you’re not reading this], but it wasn’t Best of theWeek).  What was the Best?  I don’t know yet, because I’ve barely gotten through a third of my pile.  Fortunately, for my reading public (of one or two – you know who you are), I did read the latest Avenging Spider-Man and I really liked it. 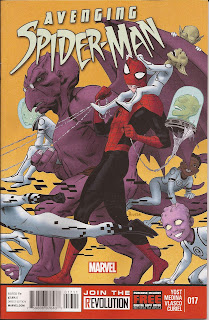 In the era of accelerated shipping schedules and bi-weekly titles, it’s quite surprising that it has been SIX WEEKS since the last issue of Avenging Spider-Man.  I don’t know what caused the delay, but it was worth the wait. 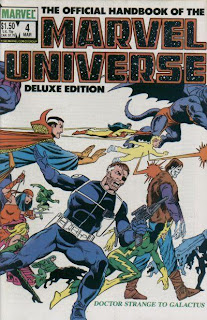 First, the Paolo Rivera cover is terrific (trying to unpack [my] adjectives this week)!  Jim did a great cover post last Monday and this one captures perfectly the essence of the story within.  I even love the Official Handbook of the Marvel Universe vibe with characters partially off panel, like this was part of a connecting series.  The Future Foundation is a goofy bunch of (intelligent) misfits and you see that clearly here.  I’ve got to hand it to Fraction for actually keeping these guys, gals, and Gonzos around, rather than jettisoning them, as soon as he took over FF from Hickman. (Buy my eBay issues -- PLEASE! [shameful plug].)  Having Spidey using his webs as a leash is really funny.  And check out Dragon Man’s sneering stare!  Boy, this is fun.  Now I understand why our LCS’s Best Covers ofthe Day feature is so entertaining.

Second, the Paco Medina art is spectacular.  NO ONE draws the Superior costume better than he does.  His She-Hulk looks super-strong, which is good because she…is…super…strong.  I guess the word I’m looking for is SOLID (Oh) solid as a rock.  We get two incredible splash pages: one similar to the cover theme and another with Potto® facing off against Death’s Head (Google it).  These aren’t like the early days of Image pin-up pages either – they actually matter.  The pacing, panel layouts, character expressions (masked and unmasked), and body language are wonderful.   Seriously, if it takes Paco six weeks to draw each issue, then publish the book every six weeks.  Maybe they can get away with it since it isn’t the main title.

Third, the story by Christopher Yost was great.  The FF need to go to the Microverse, so they call Spidey for help.  (He does his wonderful Google-goggle character summaries with his pithy commentary again.)  Only they don’t want help with the mission, they want him to babysit the 17 odd found-ation-lings.  And keeping up his Parker-loser appearance – he agrees and it’s chaos.  You learn everything you need to know about these “kids” in one issue through his interactions with them (it probably took Hickman a year’s worth of stories).  The dialogue is perfect (which is what you’d expect from the guy behind the lauded Avengers: Earth’s Mightiest Heroes cartoon [R.I.P.]).

Bentley-23’s work on a time device catches Potto®’s eye.  But it also catches the attention of the Time Variance Authority (the suits from Walt Simonson’s somewhat confusing run on the Fantastic Four).  They’re the ones who send Death’s Head back to kill them all before something catastrophic happens.  The problem for Spidey is that they know who he is now (wasn’t that going to happen last issue too).   You also get an ominous reference for Potto®’s future actions and the eventual end of his webspinning days: “Hey, is that Spider-Man?  Is he still really…Why don’t we stop it?  We could stop all this from happening, all the lives…”  Spidey saves the day like only he can by threatening Bentley to destroy the time device plans, causing the little super-villain to wet himself.  Potto®  does a great job of telling the FF off when they return and at the very end you see he’s up to some secret shenanigans surrounding Sandman!

GRADE A:  This is a wonderful series and the best “team-up” book in decades.  It’s the companion book that reads like a headliner -- if you’re following Superior Spider-Man you can’t miss these ESSENTIAL tales!
Posted by Matthew at Saturday, March 02, 2013