I had a huge stack of comics to pick up this week, which unfortunately due to Marvel Now and my digital code eBay selling program, is starting to be the norm for me.  So far my codes are not generating the Buy It Now cash that I’ve been getting in recent weeks, usually almost completely recouping my floppy costs.  If that continues I’ll have to rethink my strategy, because I can’t sustain this amount of purchasing without that subsidy.  Remarkably, I read thru eight of my twelve books Wednesday night and I’ll endeavor (Note: It is NOT pronounced “in – dee – a – vor”, which is how I read it in Micronauts as a kid) to say a few brief comments on each one.
In stack order from first to last… “SPOILERS!”

Avenging Spider-Man #018
It certainly wasn’t worthy of a whole post devoted to it (like all the previous Superior Spider-Man tales have been all year), but I still thought it was okay.  I missed the Paolo Rivera cover (I really need to add Waid’s Green Hornet series to my pull sheet where Rivera will also do the covers).  Marco Checchetto’s art was fine and Christopher Yost did a good job moving the plot forward, but I felt like it was a fill-in issue.  However, I did like the interaction between Thor and Spider-Man, especially when Thor thought Spidey’s analytical remark about Electro’s dissolution was “disrespectful”.  Maybe, it suffered because of my high expectations.

By comparison this issue was PHENOMENAL and the BEST of the series so far!  I’ll just hit a few of the highlights (otherwise this would become a solo post and I’m trying to work on the clock here).  Loved that Magneto revealed his double-cross of Scott was actually a double-cross for SHEILD.  Now I don’t know what to believe about his motivations.  As Emma said his plan was “brilliant”, but I still suspect he will take Scott down when he can.  The opening flashback for the Aussie mutant really made the two-page spread confrontation with the Avengers much more intense (on an emotional level).  I really like all of these New Mutants too.  Chris Bachalo’s art is fantastic and just has a great style to it that enhances the whole experience for me.  The ending with Scott calling out his disciples in Westchester was really cool (and super bold).  From his justification of his actions with the Phoenix force to his appeal to the masses, I’m almost a “true believer” and I know he’s half-crazed!

Age of Ultron: Book Two
This issue was MUCH better than the last one, which came out only a week ago.  My favorite part was seeing Peter Parker and his reactions to the chaos around him.  Bryan Hitch and Paul Neary did an excellent job of conveying this anguish through his facial expressions – very realistic.  The details in the city scenes are INSANE – makes George Perez look like Vince Colletta!  Looking forward to the next issue, which will probably come out next week.

THOR: God of Thunder #006
I really liked the origin of Gorr.  He definitely had a lot of reasons to be upset with his deities, leaving him to conclude that there were no gods at all.  He found out differently though and used his pent up frustration to start his murderous crusade.  I don’t agree with his reactions (he should read the book of Job sometime), but it was believable.  What would have really been cool though was to see his devoted family actually reap some positive benefit from their faith.  His exchange with Volstagg was awesome and I won’t give away the details here, but it’s worth checking out.  Reading Aaron’s comments on the letters page is one of my favorite parts – we won’t get those in the HC or trade collections!

Wolverine (2013) #001
I only got this because I knew I could sell the code.  I like Alan Davis’ art, but this book seemed to read a little too quickly for me.  The abuse that Wolverine sustains is ridiculous – I know he has a healing factor, but it just diminishes the drama to have him come back from EVERYTHING.  I did like that they acknowledged in the back that he’s a bit overexposed these days – no kidding.  Not sure I’ll be back for the next one – for Wolverine fanatics only I suppose.

Fantastic Four #005
FINALLY! -- An issue that I really enjoyed.  I still hate the super irresponsible Johnny Storm, but this book now appears to have a direction.  It was great to see Reed and Sue talk and I liked the way she grasped the severity of the situation for all of them following the sock discussion.  The mystery of Caesar was very much like a Lee-Kirby-Byrne plot point and was very interesting.  I’m not sure what happened to the Thing.  Is he hurt now too or was he possessed?

THE HIGH WAYS #3
There were a lot of twists and turns and a few revelations.  I can’t believe we only have one more issue scheduled. This could go on longer.

STAR WARS (2013) #3
This was another good issue, but I did not like Luke making time with the red-stripe girl.  He’s still supposed to be mooning over Leia, right?  This arc is really all about her anyway.  The other characters are having their moments, but she’s the focus. 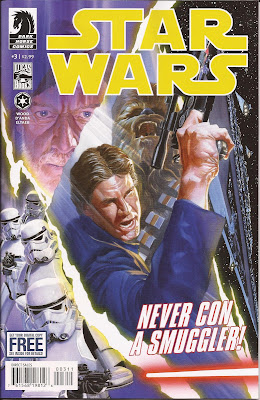 Now I haven’t yet read Batman #18 or Rocketeer: Hollywood Horror #2 not to mention the Bionic Man Annual (why did I get a $5 Bionic Man annual!!!) or the cartoon Avengers book.  I almost dropped Batman from my list, because I knew I’d want to just sell the arc eventually and thought I’d save myself the hassle, but it looked interesting – I hope I didn’t make a mistake.  The first issue of Rocketeer was very, very good and surprisingly dense too, so I’m looking forward to it.  Even though I’m almost caught up for this week, I still have several books that I didn’t read from last week (shows my interest level doesn’t it).

Are you sitting down?  I’m actually reading a book without pictures (that isn’t the Bible)!  It’s the Last Chronicles of Thomas Covenant book three: Against All Things Ending by Stephen R. Donaldson.  I’ve been a fan of this series for three decades now and I immediately got immersed into it again.  Although, I don’t think I’ve seen so many words that I’ve never read before – we’re talking PhD level vocabulary here!


That’s it for this week.  I’m about to embark on organizing my comic collection – a daunting task to be sure, which could take weeks and one that may spark a post in the near future.
Posted by Matthew at Saturday, March 16, 2013