Indies Previews for May Pt 1 of 2

Lee:  This looks to be a stronger month than most.  I think that's because there was so much trash that I was able to easily identify the good stuff.  Something like that. 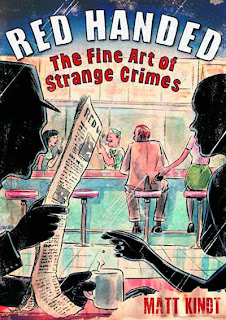 :01 First Second
Red Handed: The Fine Art of Strange Crimes HC by (w/a/c) Matt Kindt
Welcome to the city of Red Wheelbarrow, where the world's greatest detective has yet to meet the crime he can't solve - every criminal in Red Wheelbarrow is caught and convicted thanks to Detective Gould's brilliant mind and cutting-edge spy technology. But lately there has been a rash of crimes so eccentric and random that even Detective Gould is stumped. Will he discover the connection between the compulsive chair thief, the novelist who uses purloined street signs to write her magnum opus, and the photographer who secretly documents peoples' most anguished personal moments? Or has Detective Gould finally met his match? 272 pgs, FC, 6x9, $26.99
Lee: It’s Matt Kindt and these days that makes it an order on site for me. From 3 Story Man to Mind Mgmt Kindt has never failed to satisfy when he writes his own characters and stories.
Thomm: I’ve read only a little of Mind Mgmt, but it was very good. This is a clever idea, too. Taking that and Kindt’s ability to execute a story, this is a good one to get. 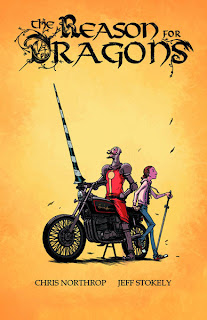 Archaia Entertainment
Reason for Dragons HC by (w) Chris Northrop (a/c) Jeff Stokely
Wendell lives a lonely, suburban existence, losing himself in books in order to avoid his motorcycle-driving stepfather, Ted. When the school bullies convince Wendell to venture into the long-abandoned Renaissance Fair grounds they all believe to be haunted, Wendell is surprised to find a man living in the barn. Believing himself to be a medieval knight named Sir Habaersham tasked with the duty of slaying the dragon he insists is wandering the woods, Wendell's new acquaintance seems the definition of crackpot. But when Wendell starts hearing rumblings-and listening to Habaersham's stories-he starts to wonder if perhaps it could all be true! In a heartfelt coming-of-age story, Wendell must defy logic in order to follow his heart and face the dragon of the forest! 128 pgs, FC, 7x10, $19.95 Visit the artist here.  Lee: This is the most straightforward indie book I am picking this month. It certainly has touches of Don Quixote, which is certainly intentional based on the cover, and the art from Stokely looks solid. If you are looking for something other than tights and capes but don’t want to get too far out in the indie deep end, this looks like it would be a good start.
Thomm: Only a little Don Quixote, which is probably a good thing if you’re telling a coming of age story. Wendell would be none too bright and more than a little crazy in his own right if he were standing in for Sancho Panza. 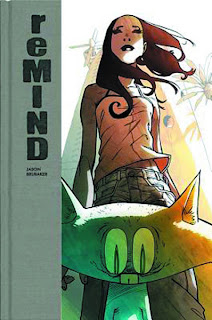 Coffee Table Comics
Remind Vol. 01 GN HC by (w/a/c) Jason Brubaker
All Sonja wanted was to find her missing cat, Victuals, but when he washes up on the shore of her sleepy coastal town several days later with a head full of stitches and the startling ability to speak her quiet life is forever changed. Together they set out to solve the mystery of his disappearance, embarking on a journey that leads to a strange kingdom under the waves and into the heart of a royal power struggle! 152 pgs, FC, 7x10, $24.95 Start reading here.
Lee: Brubaker started Remind with a Xeric grant, wrote this for a number of years, and then used kickstarter to get this book published. This is one of the best success stories I have heard about in a long time and it deserves our support. And, if you’re cold and heartless (like Thomm)… it’s a really good story with great art so there’s no excuse not to buy this.
Thomm: Being cold and heartless, I don’t need a reason not to buy this. However, it’s an interesting premise. Besides, I always find cats in works of fiction to be so much more likeable than the actual animals. 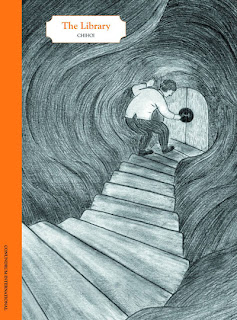 Conundrum International
The Library by Chihoi HC by (w/a/c) Chihoi
The Conundrum International Imprint debuts with the stories of Chihoi, a young Hong Kong artist. The Library is the first English edition of his work. Reading the short stories included in this volume is like reading someone else's dreams. The Library or Father reminds one of Kafka; I'm with my Saint feels Gauguinesque. The Library is book of beautiful pencil lines, written to illustrate the tales we know in our heart but have never witnessed. Introduction by Christian Gasser 184 pgs, b/w, 7x9.5, $20.00 Sample pages from one of the collected stories here.
Lee: I am always up for something new and different and if the samples are any indication, this is new and different. There is a certain surreal quality to Chihoi’s art that makes this interesting.
Thomm: “The tales we know in our heart but have never witnessed”? What the hell does that even mean? This seems like an art book, primarily, which makes it all the more amusing that I found that it’s listed on the Sears web site for sale. It’s a bit out there for this paragon of America’s days gone by. 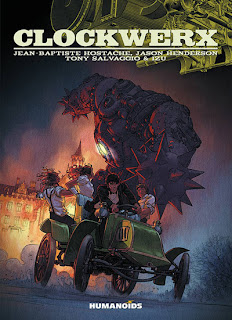 Humanoids Inc
Clockwerx HC by (w) Jason Henderson (a/c) Jean-Baptiste Hostache
London, 1897. A series of mysterious deaths on the shipping docks have an ex-Scotland Yard officer on the hunt for clues. What he uncovers is a war between a huge corporation and a renegade group of individuals fighting for an energy source that could control the world and that powers the very robotic machines, called Clocks, being used to fight this epic battle. A trans-Atlantic collaboration between American authors Jason Henderson and Tony Salvaggio and French illustrator Jean-Baptiste Hostache, Clockwerx is a non-stop Steampunk thrill ride as captivatingly rendered as it is written. 104 pgs, FC, 8.5x11, $29.95 Visit the artist here.
Lee: What would an indies post be without something from Humanoids? Actually, there wouldn’t be a post if I didn’t mention them. Anyway, this looks to be more of the usual high quality Euro comic material that you expect from Humanoids. As for the art, Hostache has a realistic style that’s just fantastic. I’m sold.
Thomm: Meh. It sounds a lot like a lot of other Steampunk works out there. Looks like it, too. 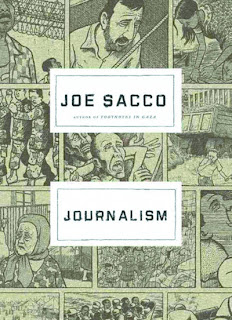 Metropolitan Books
Journalism SC by (w/a/c) Joe Sacco
Over the past decade, Joe Sacco has increasingly turned to short-form comics journalism to report from the sidelines of wars around the world. Collected here for the first time, Sacco's darkly funny, revealing reportage confirms his standing as one of the foremost war correspondents working today. In The Unwanted, Sacco chronicles the detention of Saharan refugees who have washed up on the shores of Malta; Chechen War, Chechen Women documents the trial without end of widows in the Caucasus. Other pieces take Sacco to the smuggling tunnels of Gaza; the trial of Milan Kovacevic, Bosnian warlord, in The Hague; and the darkest chapter in recent American history, Abu Ghraib. 208 pgs, PC, 8x11, $22.00 Read a Sacco story published in the Guardian here. Lee: Sacco is one of, if not the, best visual journalist out there. His stuff is insightful, intelligent, incredible and a host of other words that start with the letter “I” that I can’t think of. If you are interested in real world events and the news then this is for you.
Thomm: Indelible? You’re welcome. It’s impossible to report on these stories without someone accusing you of an agenda, so I’m interested in seeing what his perceived agenda is. I have to say that if Abu Ghraib is America’s darkest chapter in recent history then the blurb writer, if not Sacco, is lost in a bit of hyperbole. The Abu Ghraib incidents were stupid and illegal but rank far below such things as, oh, I don’t know, slavery, The Trail of Tears, Japanese internment, Jim Crow, and even the white collar crime of Watergate. Hell, Guatanamo’s prison is worse on a daily basis, if your concern is the treatment of prisoners and evidence free detention. 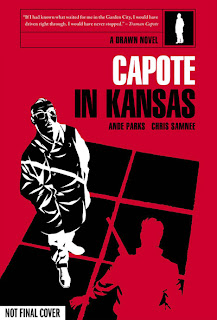 Oni Press Inc.
Capote in Kansas HC by (a) Ande Parks (a/c) Chris Samnee
Murder. Not intricately plotted whodunit. Not fiery passionate fury. But dirty, sad, disturbing actions from real people. That's what Truman Capote decided to use for In Cold Blood - his bold experiment in the realm of the non-fiction novel. Following in that legacy is Capote in Kansas, a fictionalized tale of Capote's time in Middle America researching his classic book. Capote's struggles with the town, the betrayal, and his own troubled past make this book a compelling portrait of one of the greatest literary talents of the 20th century. A new edition of the critically acclaimed graphic novel by Ande Parks (Lone Ranger) and Chris Samnee (Daredevil). 144 pgs, b/w, 6x9, $19.99
Lee: This has been around long enough that you might be able to find a copy at your local library. I know I did! This is a great book that retells the story of Capote during a turbulent time in his life. As biographies go, this is a good one.
Thomm: Coincidentally(?) this came out the same year as the movie, Capote, which trod the same ground. Both have had many accolades.