“Now is the winter of our discontent”
Made so by meteorologists who cannot
Predict the slightest flake of snow!

Let me tell you about my Wednesday.  They had been touting the “BIG” storm for days, calling for four to eight inches of heavy wet snow.  Worst of all it was to be an all-day event beginning Tuesday night and continuing until 0300 Thursday.  While this hasn’t been the snowless winter of last year, it has been the winter of near-misses for those of us living in the Baltimore-Washington corridor.  So, I was fully prepared to go to work on Wednesday, thinking eight inches over 24 plus hours would mean pretty manageable and plow-able totals on the roads.  I also (usually) work in downtown Baltimore and cities are notoriously warmer than the suburbs.

I wake up before my alarm and look out the window – nothing but wet pavement.  I quickly shower and dress, but before I leave the bedroom, my wife tells me that we’re still under a Winter Storm WARNING and that there is some snow on the ground already.  I promise to check the forecast again myself, be careful on the roads, and call her as soon as they announce that schools are closed.  I get outside and it’s snowing a lot and even though it’s only a dusting on the car – it is thick and wet.  I know I can get to work though at this hour with few people on the road, so I head out.  Maybe it was just the headlights, but the extra-large flakes were making it hard to see.  It certainly wasn’t blizzard conditions, but if this was the start of the storm, then my theory that conditions would still be drive-able eight-hours later might not pan out and it wouldn’t be worth the hassle even if it meant missing my weekly trip to the comic store.  I make a short circuitous route and return home, phone-in that I won’t be in, and after putting away the dishes, head back to bed.

I wake up five hours later at 0800 and look out the window again – nothing but wet pavement!  The schools are closed, work is on liberal leave, but I’m upset that I didn’t go for it (I’m sure the additional sleep was helpful).  I pray for a better attitude over my Cap’n Crunch Berries (Thanks to Manny for saying, “You need to pray” when he usually does the honors).  It was a relaxing morning and they were STILL calling for the “HEART” of the storm to come around 1300 and run until midnight.  Yeah, right.  It was mostly snow/raining around 1000 when I set out with two of my children for Cosmic Comix and Toys.  We were the first customers to arrive (thirty minutes before the official opening).  It would’ve been a quick trip, except I deliberated long and hard over my two free empty box bonus comics.  I finally choose Uncanny X-Force #002 and Dollar Bill (I love Steve Rude) – two books I’d skipped before.  I was hoping to get both with digital codes, but I couldn’t bring myself to get a duplicate of what I already had.  I almost got the last two chapters of Rotworld, so I could better sell my Swamp Thing lot on eBay, but that would’ve been like throwing money down the drain.  Anyway, the friendly store owner, Rusty, remarked that Superior was the best issue since #002.  I told him the real reason why I was so keen on getting to work this morning was to have an excuse to come get my comics “while I was out”.

Now I’ve been “loving on” Superior Spider-Man for most of the year and…you guessed it…I will continue to do so TODAY! 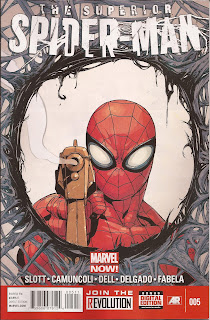 The last issue precipitated me referencing several controversial issues (and an early political endorsement) in my review and it was nice to see Slott address the death-penalty one head-on (literally) in this one.

Massacre is on the loose and he’s thirsty.  He wanted a Mocha Cola (that’s Coke in our world), when he grabbed a bite to eat at the local Burger Town outside of the Ravencroft Asylum.  Unfortunately, they only had Pepsi Phizzy-Cola, leading him to mow down all but two patrons (only because he needed their car).  Now, he’s in Manhattan and he’s infiltrated the dwelling of the Phizzy-Cola C.E.O.  In exchange for $12M he offers to spare her life and kill everyone he can in the heart of New York wearing a Mocha Cola sweatshirt.  She gets to keep living and it’ll be bad publicity for her competitors.

Meanwhile the Superior Spider-Man is working with Horizon Labs’ Uatu Jackson (small dark-skinned bald kid who doesn’t live on the moon or wear a blue toga) to add his face-recognition software to his Spider-Bots.  The purpose is to locate Massacre, but with “eyes” everywhere it also gives Potto® a lot of knowledge…and “knowledge is POWER”.

“What?  I’m no ‘Big Brother’. I’m Spider-Man.  Think of this as part of a ‘Friendly Neighborhood Watch”.

Rather than waste time looking for someone when his ‘bots can do that for him, Potto® decides to visit the “little person” girl who offered to tutor him in Physics.  She’s a “science chef”, which I think would be really cool actually, and she makes some awesome food for him.  The way to a man’s heart is often his stomach and “this could be the beginning of a beautiful friendship” between the two.  He convinces her that he’s not just a pretty face when he explains Reed Richards’ Unstable Molecules, but she’s endeared herself to him enough that he’ll continue to date her seek her assistance.  Ghost-Peter is still hanging around and he makes a really great comment on his evening ingestion:

“You Pig!  Look at you!  Chowin’ down while Massacre’s out there – massacring people!  Eating all those carbs! AND dessert!  Forget my reputation, when I get that body back…I’ll have to work off an Otto Octavious-sized GUT!”

The Spider-Bots spot Massacre and Potto® calls for police backup (something Peter has never done), but he has to make a side-trip first.  Spider-Man has realized that Massacre always has some other hostages somewhere as an ace-in-the-hole when confronting resistance.  So, he figures out where they are by following his detonation frequency (something Peter wouldn’t think to do either) and saves them.

“Yes. A simple enough device.  Don’t Fear.  I am VERY familiar with these traps.  This won’t take long.”

Massacre starts his attack in Grand Central Station, killing the police on the scene and locking out the ones outside by bombing the doors.  Potto® enters through the unarmed upper windows and uses Massacre’s rampage as a tactical advantage to get the drop on him from behind.  But when a young boy is endangered, Peter uses his influence to force Potto® to save him, exposing his position.  More shots are fired and Peter urges Potto® to save the bystanders; however, Spider-Man knows his priorities:

“People are getting shot all around me!  I could’ve ended this!  Focus!  Only ONE thing matters here – taking this lunatic OUT!”

He lands a punch and knocks Massacre’s gun from his hands.  Massacre tries to pull his ace and Potto® resolutely picks up the weapon and shoots him in the chest.  The skull-plated killer reaches for his other weapon and Spidey crushes his hand before he can grab it.  Then he aims the gun at Massacre’s head and shouts to him with the crowd listening.

“So what NOW?!  Do I web you up?  Leave you for the cops with a friendly little note?  Wait till you break out and kill AGAIN? Over and over?!  How many are DEAD and DYING here?! When is it ENOUGH?!  WHAT SHOULD I DO?!  TELL ME!”

An old man yells, “DO IT!”  And Massacre starts to weep.  The man with no feeling feels fear “for the first time in years” when confronted with real consequences.  Ghost-Spidey sees this as a hopeful sign for rehabilitation, but Potto® has a different opinion:

“You are who you are.  That killer will ALWAYS be hiding inside you.  There is only one solution here”

No need for sound-effects to accompany the blinding white flash of execution.
(I recently read Numbers and the Bible is pretty clear on the death-penalty.  Click here if you’re interested in what it says.)  Now, I don't agree with Spider-Man doing the execution, but clearly this individual needed to pay for his crimes long before he had the opportunity to kill again and again.  Of course, when will Potto® pay for HIS crimes?!

Potto® isn’t done yet.  He confronts via a video screen the C.E.O who paid Massacre to spare her own life and he’s going to make her confess:

“Well now you can tell the authorities!  TELL THEM or answer to ME!  I see everything in this city.  EVERYTHING!  That is my POWER! And my RESPONSIBILITY – to watch and JUDGE YOU ALL!”

Wow.  This book is AMAZING!  I can’t wait to see what happens next (him getting fired from the Avengers – finally).

GRADE A+:  Spider-Man goes Judge Dredd on criminals, taking time to enjoy a wonderful homemade meal in the process, and he continues to show why he’s rightly called “Superior”! 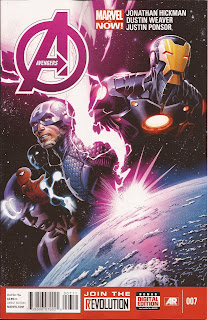 Now a brief comment on Avengers #007:  I’ve been barely enjoying this series, since it’s so slow moving.  However, this issue was outstanding.  I was surprised to see the New Universe characters again and I loved the way he introduced Starbrand.  I totally ignored him too!  Best issue of the series so far!
Posted by Matthew at Saturday, March 09, 2013