Lately I've been looking at more recent series but it's time to dig into the vaults for some bronze age goodness.  Today I present one of my favorite series from the 70s... Master of Kung Fu.  It was the first series in which I was able to collect every single issue.  I had a complete run!  As a young comic nerd, this was no small achievement.  I was thrilled. 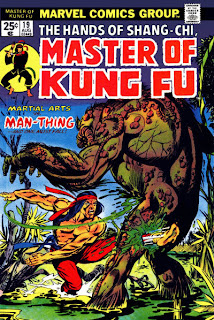 Master of Kung Fu #19, August 1974
Pencils: Gil Kane
Inks: Tom Palmer
This was the cover that got me started.  Shang-Chi battling the Man-Thing.  Interior art was by a very young Paul Gulacy which never hurts anything.

More below the break 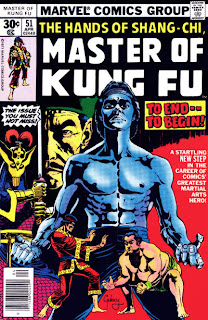 Master of Kung Fu #51, April 1977
Pencils/inks: Paul Gulacy
Believe it or not, Gulacy only did 4 covers for the series.  This was the first, and imo the best. 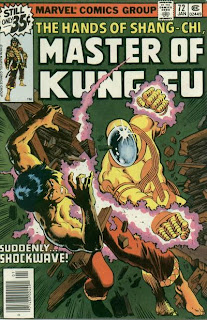 Master of Kung Fu #72, January 1979
Pencils/inks: Mike Zeck
It's amazing when you think about it but this series launched several careers!  After the golden age of Gulacy on the book there was a slight lull until Mike Zeck came on board.  For the next couple of years the series was just fantastic again. 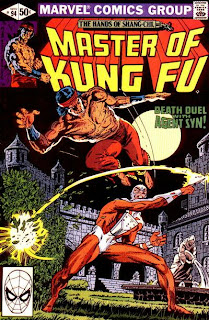 Master of Kung Fu #94, November 1980
Pencils: Mike Zeck
Inks: Gene Day
The absolute peak was this pair, Zeck and Day.  Day's inking was incredible and really made Zeck better.  Compare this cover, Day inks, to Zeck inking himself.  There really isn't any comparison. 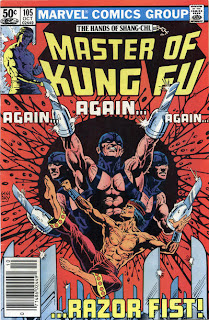 Master of Kung Fu #105, October 1981
Pencils/inks: Gene Day
Eventually Day took over art chores all by himself.  He was on the cusp of superstardom before his untimely death.  Go to the back issue bins and check out MoKF 100-118... what you find will amaze you.


That's all for this weekend.  Now go outside... if you can.